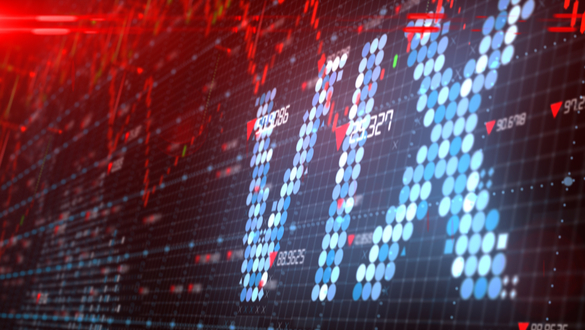 By James DiGeorgia and Michael London,

All of our key Erlanger Chart Room warning signals are flashing yellow for the U.S. indexes. This doesn’t mean that a sell-off is guaranteed but we are approaching a legitimate red alert that we believe could manifest itself in the two months as a 10% correction in the major U.S. stock indexes, with a possible spike of as much 60% in the Volatility Index (VIX) which is now trading as we write this alert 12.27.

While this yellow alert was confirmed on the close of the U.S. Markets yesterday, I also received an alert from one of my favorite technical analysts Tom McClellan the Editor of The McClellan Market Report who use his own proprietary charts and signals that clearly show he sees the potential for a sizable correction. Let us quote Tom’s comments to put this all in perspective…

“The major averages are ignoring missile strikes, oil market turmoil, and excessively bullish sentiment, keeping prices marching higher in 2020.  But we have a major bearish divergence now in the VIX Index, which is NOT making lower lows to confirm those higher price highs.”

“The VIX Index made its lowest closing low for this price uptrend back on Nov. 26, at 11.54.  Since then, it has been making a succession of higher lows, even though prices have continued higher.  That sort of bearish divergence has meant a meaningful top was looming, based on past episodes.  In my long look back at this relationship, I find that the VIX does not always give us a divergence like this at every stop where we might like to get such a message.  But when it does show us a divergence like this, it is worth listening.  And typically, the time span of the divergences that matter is only a few weeks.  Once we get a big VIX spike up toward 20 or higher, the clock gets reset in terms of tabulating a new divergence.”

“Even though the VIX is showing a slight upward cant, it has remained pretty quiet.  This next chart shows a 50-day standard deviation of closing VIX values: 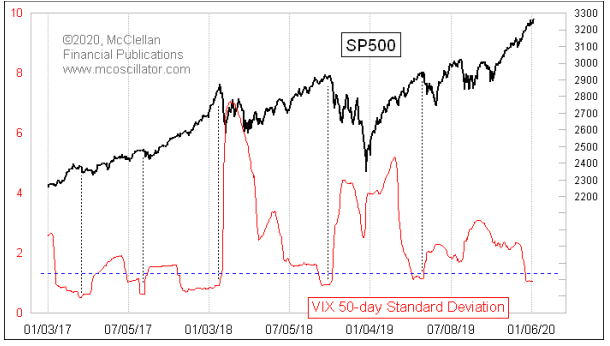 “The generally quiet VIX Index readings over the past 50 trading days have produced a very low reading for this indicator.  Such readings are reliably associated with meaningful price tops.”

“The problem is that this is a condition and not a “signal.”  The low readings can continue for a long time before they finally are allowed to matter.  So a condition like this helps to inform us about what is coming, but it does not say when the final price top moment will get here.  Having said that, the moment when this VIX standard deviation starts to rise rapidly is a good tell that the price stop is already in.  But that tell usually comes via a big spike up in the VIX Index itself.”

We don’t know what event(s) would trigger a nasty correction but both our, and McClellan’s signals are in congruent and we can’t exactly nail down the exact date of the exact day that the reversal and spike in the VIX. We do however see the smoke on the horizon. The deviations between the VIX versus the new highs that are being made are clear in his charts and ours is enough for us to initially recommend…

To receive this recommendation you must subscribe to World Opportunity Investor.  A one year subscription costs just $72 – that‘s 54% off the regular subscription price.