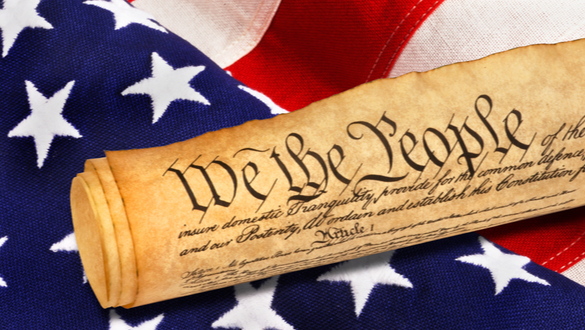 Up to now, it’s only been a Constitutional crisis. Now President Trump has finally crossed the line, outright violating the Constitution that will force Congress to vote for an Impeachment Inquiry that will unleash the multitudes of his crimes in and out of office.

No one is above the law. All office holders are sworn to preserve, protect, and defend the U.S. Constitution, especially the President of the United States.

His “Excellency” Donald Trump (named by Kim Jong Un) is now in defiance of two of the three branches of government. His decision to disobey this Supreme Court decision makes him a tyrant and enemy of the people. 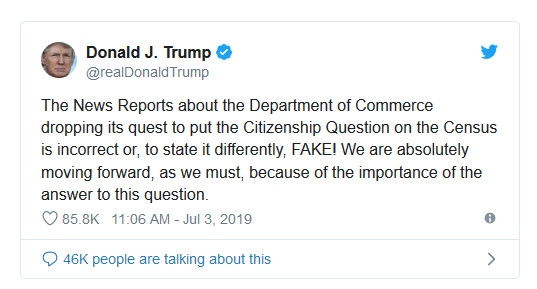 Judge George J. Hazel of the U.S. District Court for the District of Maryland called an emergency conference call hearing on Tuesday after reading President Trump’s Tweet that indicates he intends to defy the Supreme Court’s decision.  According to all information presented, the Census Forms must have begun printing to meet the legally established deadline this past Friday, June 28, 2019.

Also on the call, Joshua Gardner, who had led the government defense team in the cases before Hazel. The transcript of the call, which was released last night, showed he was just as surprised as the Judge that his earlier representation in writing to the court that the citizenship question was removed and the form was being printed without it, wasn’t the truth…

“The tweet this morning was the first I had heard of the President’s position on this issue, just like the plaintiffs and Your Honor,” Gardner said to the judge, the transcript shows. “I do not have a deeper understanding of what that means at this juncture other than what the President has tweeted. However, as you can imagine, I am doing my absolute best to figure out what’s going on.”

Gardner turned the call over to Hunt, who said the plan was to try to move ahead. Plaintiffs in the case who won before the Supreme Court expressed outrage Wednesday night over the backtracking.

Thomas A. Saenz, president and general counsel of the Mexican American Legal Defense and Educational Fund, said in a statement.

“Under this administration, there’s no accounting for doubling down on stupid… “Today’s reversal from yesterday’s certainty repeats the pattern of this entire affair, which began with Secretary Wilbur Ross — who inexplicably remains in the Cabinet — lying to Congress and the public about the reason for the late attempted addition of a citizenship question to Census 2020. MALDEF is fully prepared to demonstrate in court that racism is the true motivation for adding the question, and by doing so, to prevent the question from appearing on the Census.”

Dale Ho, director of the ACLU’s Voting Rights Project and a lead attorney for plaintiffs in the New York trial, vowed that…

“any attempt at an end run around the Supreme Court’s decision will be unsuccessful, and will be met swiftly in court.”

Hale’s assertion would normally be correct; however, we are dealing with a lawless POTUS who is intent on becoming a dictator. No court order will be adhered to by this President. When a President violates his oath of office and refuses to obey an order of the Supreme Court – it’s a Constitutional Crises.

Conservative radio host and former administration lawyer Hugh Hewitt wrote on Twitter that President Trump could just issue an executive order and have his commerce secretary “add such questions for particular reasons” which would render moot the prior dispute.

Hewitt’ suggestion means that the President can do anything he wants by executive order. He can tax, he can legislate, and he can imprison his political enemies, and if he wants to disband Congress, the Legislative Branch and end elections. Supreme Court, which is the ultimate arbitrator of the law, is no longer.

If President Trump takes the advice of Hugh Hewitt, this democracy will perish from the earth. Congress will vote for impeachment, and this criminal POTUS will become a dictator that will ignore every court order.

If this unfolds, President Trump will order the arrest of every Democrat member of Congress and Judiciary. Hugh Hewitt, Senators McConnell, and Graham will cheer his Excellency, and state legislators in every blue and purple state will vote to secede from the Union.

Putin’s control of this criminal president will no longer be a question by any intellectually honest observer.

A record 60 million people will peacefully protest in the streets, and the second civil war will begin.  Trump will kill the 2020 census because he will also suspend the need for the 2020 election will not take place. Trump will be President for life and will appoint a one-party Congress and Senate to rubber stamp his Dictatorship.

I, for one, will go underground joining millions who will not live under the tyranny of a dictatorship and will echo Patrick Henry in my thoughts and deeds... Give me liberty or give me death.