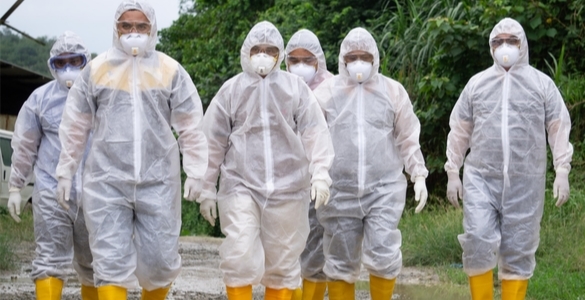 The Coronavirus spreading quickly throughout China could be on its way to becoming a pandemic. The reported number of deaths, the current number of infections, the number persons hospitalized, and the numbers of people in cities quarantined may be only the tip of the outbreak.

The Coronavirus outbreak is starting to look like one of those fictional apocalyptic science fiction movies that begin as a storyline of a virus bringing mild curiosity in the news services but then grows in its intensity and evolves into an apocalyptic world event, affecting billions.

The storylines of these apocalyptic visions of humanities’ annihilation as a result of a virus are a popular science fiction genre. The stories are popular because they are based on a conceivable reality. If a team of researchers based in the United Kingdom and United States report in a preliminary paper are right, the number of confirmed cases at the outbreak’s epicenter in Wuhan reflects only 5 percent of people who are infected.

China has only sent a paltry 450 military medical staffer to Wuhan to help treat people exposed to the Coronavirus; this includes professionals who have experience treating SARS and or Ebola. The new hospital with 1,000 new beds to care for those suffering from the Coronavirus given the possibility that as many as 190,000 in a city the size of London in as soon as 14 days shows the Chinese government much less the World Health Organization are potentially ignoring what could be global pandemic; that could become the 21st century’s version of the Spanish flu that infected 500 million people worldwide and left as many as 50 million dead.

Many infected are not showing typical signs of a virus, such as an elevation in temperature.  The official report on Tuesday has reported 440 cases and 17 deaths may have been 12,000. The latest reports put the infected rate at just 729 and over 20 deaths.

I hope that the team of scientists led by Jonathan Read at Lancaster University will be proven wrong. The team claims to have plotted a temporal map of the Coronavirus’s spread, starting January 1, 2020, when local authorities closed the meat-and-animal market where the virus is believed to have crossed to humans from an unknown source. Jonathan Read’s team of scientists worked under the assumption that any spread following the first of the year could only be between humans. Could they be wrong? The paper, at this point, has not undergone peer review, appeared on the Medrxiv preprint server.

The models constructed by the University Lancaster team of scientists predict a dire start to February: further outbreaks in other Chinese cities, more infections exported abroad, and an explosion of cases in Wuhan…

Brandon Brown, an epidemiologist at the University of California at Riverside who was not involved in the study when asked by an investigative reporter on Friday about the paper, responded …

Meanwhile, another study, published Friday by a team of Chinese scientific researchers in The Lancet looked at clinical data from the initial 41 patients admitted to hospitals in Wuhan, the scientists reported that 2019-nCoV, the technical name of the Coronavirus causes a range of symptoms, including pneumonia, fever, and cough, and can strike even healthy people, not just older individuals with underlying health issues. The Chinese researchers believe the virus’s incubation period to be between three and six days. The scary part of the Coronavirus is that people can become carriers of the virus without showing any symptoms.

The studies both suggest large numbers of people could be walking around for days with no symptoms, spreading the virus to anyone they come in close contact.  The scary part of the Coronavirus is that people can become carriers of the virus without showing any symptoms. The Lancaster group’s potentially explosive numbers seem plausible to Brown….

“Right now, there is plenty of uncertainty on what will happen, but models may be our best method to predict how the epidemic will progress in the near future.”

As of now, no one knows how infectious the 2019-nCoV (Coronavirus) is? The Lancaster University, scientific team’s models, estimates that the number of people one victim can infect—known as the virus’s reproduction number—is between 3.6 and 4.0. SARS, by comparison, was between a 2 and a 5, and measles, the most contagious disease known to humans, is a whopping 12 to 18. The higher the number, the less wiggle room public health officials have to break the chain of new transmissions before an outbreak gets out of control. Anything above 1 is bad from a containment perspective.

There is, at this point, competing opinions on the Coronavirus infection rates. Yesterday, Harvard researchers Maimuna Majumder and Kenneth Mandl reported a preliminary assessment of the virus’s transmissibility as ranging from 2.0 to 3.3. WHO officials were even more conservative estimating that the infection rates to be … between 1.4 and 2.5.

His decision to quarantine 40 million people, shut down the country’s cinemas and restaurants and decided to open a second emergency hospital is to be built there within weeks to handle 1,300 new patients, in addition to the construction of another 1,000-bed hospital already under frantic construction shows the Chinese government is still not positioning itself if the team of scientists led by Jonathan Read at Lancaster University is right and within weeks 190,000 cases are diagnosed.

Thursday, the first death of a doctor treating patients with the Coronavirus in Wuhan had reportedly died of the illness.

The deployment of 450 trained Military Medical specialists has done little to tamp down the fear in Wuhan…people waiting at one hospital in the city were angry and frustrated. One woman, who didn’t want to be named, told AFP…

“It takes at least five hours to see a doctor…Nurses are brave, but management is messy.”

While the WHO has not declared a global health emergency reported, the Coronavirus had undergone at least four generations of spread. That means that one person caught it from someone else, who caught it from yet another human, who was infected by a fourth individual, who contracted it from a nonhuman source.

The WHO report on the coronavirus ability to jump from host to host contradicts earlier reports that transmission was limited to family members and health care workers who’d been in close contact, and supports the notion that the virus is already circulating much more widely than confirmed cases indicate.

How this will affect the world economy and financial markets

Fear is starting to seep into the U.S. Stock Market. Our sister publication World Opportunity Investor has made decisive recommendations to hedge its recommendation and has recommended a market index that could potentially turn $8,800 into $17,600 or even as much as $35,200 if the coronavirus infection scales up to 190,000 in Wuhan and spreads at the same speed throughout China and globally at the same rate.

World Opportunity Investor is just $72 a year, and we’ll send you a Morgan 90% Silver Dollar as a free bonus along with some bonus reports. Our track record was exceptional since inception three years ago – over 2,500% in a cumulative net before brokerage fees and commissions profits after all profitable and losing trades in the last. The results are real but hypothetical because we never buy or sell what we recommend to eliminate even the appearance of a conflict of interest, or front running in any of our buy, sell or hold recommendations.

Also, our other sister publication the Gold and Energy Options Trader to dramatically leverage the possible Black Swan nose-dive. If you are not a subscriber, you can subscribe for a 60 day trial for just $49, after which we will call you or email you allowing you to subscribe monthly or yearly at our best rate. You can click here to subscribe or call 1-888-289-2244.

Our track record over the past 11-12 years has been amazing. The service is easy to follow, and we make both long and short recommendations, and despite this being gold and energy centric we do recommend options on the Standard and Poor Index, NASDAQ Index and other major indexes when we get buy or sell signals.

We encourage everyone willing to buy, sell options to subscribe to our Gold and Energy Options Trader