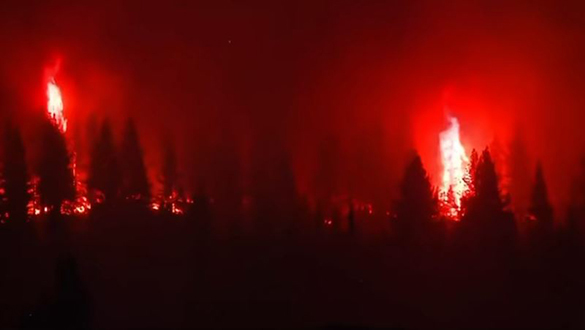 The Bootleg Fire in Southern Oregon, which was sparked by months of dryness and a searing heatwave last month, consumed more than 340,000 acres, or 530 square miles, of forest and grasslands.

And, when climate change is causing wildfires to become more extensive and more intense, it is also one of the most extreme, becoming so massive and hot that it is altering winds and otherwise changing the atmosphere.

"The fire is so enormous and is generating so much energy and intense heat that it is affecting the weather," said Marcus Kauffman, a spokesman for the state forestry department.

"Normally, the weather forecasts what the fire will do.

In this instance, the fire is forecasting what the weather will do."

The Bootleg Fire has been burning for two weeks. For the majority of that time, it has exhibited one or more forms of extreme fire behavior, resulting in rapid changes in wind and other conditions, causing flames to spread rapidly in the forest canopy, igniting whole stands of trees at once, and blowing embers long distances, igniting spot fires elsewhere.

A rising cloud of hot air, smoke, and moisture reached aircraft heights and created lightning. Wind-driven fronts of flame that have stampeded across the landscape frequently leapfrogging firebreaks. There's even a chance of a rare fire tornado forming. And Philadelphia and New York visibility has been dramatically reduced as air currents carry smoke across the country.

According to Chuck Redman, a forecaster with the National Weather Service who has been stationed at the fire command headquarters offering forecasts, the situation is "difficult and dangerous."

Fires that are so intense that they generate their own weather complicate firefighting attempts.

The intensity and tremendous heat can cause the wind to blow around them, causing clouds to form and, in some instances, causing so-called fire tornadoes — swirling vortexes of heat, smoke, and high winds — to form.

This included the devastating Carr Fire, which raged through 130,000 acres near Redding, California, in July 2018, destroying over 1,600 structures and resulting in the deaths of at least eight people, some of whom were attributed to a fire tornado with winds reaching 140 miles per hour that were captured on video.

Bootleg Fire is no exception to the rule since many wildfires develop in size very quickly.

Furthermore, the variable weather conditions have caused some of the almost 2,200 firefighting workers to relocate to safer positions virtually daily, significantly complicating efforts to bring the blaze under control.

More than 75 houses and other structures have been destroyed.

On Thursday night, the fire jumped a line that had been doused with chemical retardant along its northern edge, forcing firefighters to retreat.

It was simply the latest example of a fire breaking through a firebreak.

"This fire presents a significant challenge, and we anticipate a prolonged battle for the foreseeable future," said Joe Hessel, the incident commander for the forestry department.

And it's likely to remain unexpected in the future.

"Fire behavior is influenced by a variety of factors, including fuels, topography, and weather," said Craig B. Clements, director of the Wildfire Interdisciplinary Research Center at San Jose State University.

"It changes, on average, from day today.

"Sometimes, it is minute by minute."

Mr. Redman stated that the fire had produced tall updrafts of hot air, smoke, and moisture known as pyrocumulus clouds virtually every day, with some of them reaching heights of up to 30,000 feet.

He claimed that they witnessed one of these clouds collapse, which can occur in the early evening when the updraft ceases.

"All of that mass needs to come back down," he explained, which forces air near the surface outward, resulting in powerful, gusty winds in all directions that might spread a fire.

Last Wednesday, however, the weather circumstances led to the formation of a larger, taller cloud known as a pyrocumulonimbus, which is akin to a thunderhead.

According to Neil Lareau, a researcher at the University of Nevada, Reno, who studies wildfire behavior, the fire likely reached an altitude of approximately 45,000 feet.

The massive cloud triggered lightning strikes, which alarmed firefighters because they could spark new flames.

It's possible that it brought the rain with it.

"Some of these events have the effect of raining on themselves," said John Bailey, a professor of forestry at Oregon State University.

Rain can be beneficial because it dampens some of the fuels and helps halt the fire's spread.

On the other hand, rain can cause deadly downdrafts because it cools the air closer to the surface, as Dr. Lareau explains.

There have also been reports of fire whirls, which are small spinning vortexes of air and flames that are typical to many wildfires and are sometimes incorrectly referred to as fire tornadoes.

Fire whirls are modest, measuring just a few dozen feet in diameter at their biggest, and they last only a few seconds to a few minutes.

Dr. Lareau, on the other hand, believes there are some indications that the Bootleg Fire may have triggered a confirmed fire tornado, which can be several thousand feet in diameter, with wind speeds above 65 miles per hour, extend thousands of feet into the air, and last for much more extended periods.

"It appears to have been generating some very significant rotation," he said.

Fire tornadoes form when a plume of hot air rises within a fire, drawing in more air from the outside to replace it. Local topography and changes in wind direction, which are frequently generated by the fire itself, can impart a spin to this in-rushing air, and stretching of the air column can encourage it to rotate faster, similar to a figure skater bringing her arms in to increase her spin.

Mr. Redman stated that the incident command had not received any reports of a fire tornado.

"However, it is entirely possible" for one to occur in a fire this large and violent, he stated.

"When we get these extreme events, it's something we have to be on the lookout for."