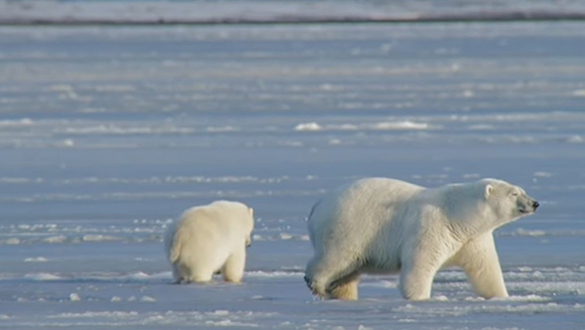 In the Arctic National Wildlife Refuge, the fight over oil drilling continues. The Trump administration conducted the first lease auction in the coastal plain, the refuge's northernmost section. Joe Biden halted oil drilling in the sanctuary. Environmental questions are being studied.

The Interior Department will publish a notice of intent in the Federal Register on Wednesday, kicking off the process of completing a supplementary Environmental Impact Statement for the refuge's 1.6 million-acre coastal plain oil and gas leasing program.

The study would involve "correcting flaws" in the first Trump-era impact statement, according to the notification.

The news of the new study, which will begin with a 60-day public comment period, is the latest effort by President Biden's administration to undo some of the Trump White House's pro-drilling accomplishments.

Mr. Biden is opposed to oil development on the refuge's 19 million mainly pristine acres, home to migratory caribou, polar bears, and other species.

For decades, the coastal plain, which is believed to overlie billions of barrels of oil, has been off-limits to oil production.

That changed in 2017 when the Republican-led Congress passed a scheme for oil and gas leasing.

In 2019, the Bureau of Land Management, a department of the Interior, issued an environmental impact statement.

It received final approval in September, and leases for many tracts inside the refuge were auctioned during the Trump administration's last days.

According to the decision, among the errors in the first impact assessment was a failure to adequately evaluate various options for leasing less refuge land, as required by federal environmental regulations.

"Until those leases are canceled, and the Arctic Refuge drilling requirement is repealed, one of America's few remaining wild areas will remain threatened," she added.

Since 1977, whether to drill for oil in the ANWR has been a source of political contention in the United States.

The dispute centers on oil drilling in a portion of the coastal plain dubbed the "1002 region."

Much of the argument over whether to drill in the 1002 region of ANWR centers on the quantity of commercially recoverable oil in relation to global oil markets, balanced against the possible damage to natural species, most notably the Porcupine caribou calving habitat.

The Arctic was discovered to have vast reserves of oil and natural gas.

Specifically, ANWR encompasses territory that may contain 7.7 to 11.8 billion barrels (1.22 to 1.88 billion cubic meters) of oil.

Major oil firms are known to collaborate with indigenous organizations, dubbed "native corporations," in Alaska to drill and export millions of barrels of oil each year.

Opponents of drilling in the Arctic National Wildlife Refuge say it will endanger indigenous communities' lives.

These tribes depend on the fauna of the ANWR, the animals, and the plants that call the refuge home.

Additionally, drilling may pose a danger to the area as a whole.

When businesses explore and drill, they remove flora and damage permafrost, which may negatively affect the land.