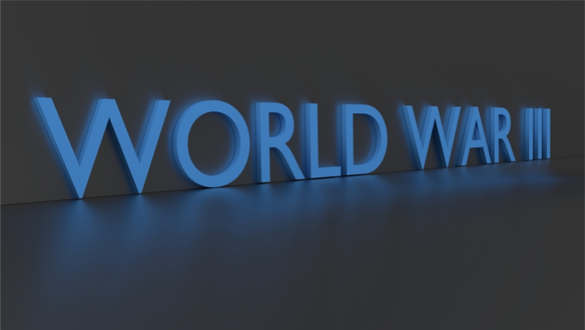 We could be just days away from a Russian invasion of Ukraine. Russia’s extensive military equipment and weaponry on the country’s borders and Ukrainian commanders are on “high alert with growing concern.” There’s a growing concern the Russians and Chinese are about to test the resolve of Western democracies to protect the independence of both Ukraine and Taiwan’s democracies.

The long-simmering military crisis between Russia and Ukraine that began with Russia’s invasion and annexation of Crimea on March 18, 2014, appears on the verge of erupting into a full-scale war.

Russia’s President Putin has amassed approximately 100,000 troops and massive amounts of military equipment to invade the two countries’ borders. Senior Ukraine military sources sound the alarm and express fear that Russia is about to launch a country-wide invasion of the former Soviet territory.

Putin’s navy has also taken a wartime footing on Thursday, announcing a war-fighting fleet that will be in a position in a few days to fully support a Russian invasion.

“Aggressive Russian troop movements towards the border have caused a great deal of concern within the Ukrainian Ministry of Defense.

“The situation is being monitored constantly. I would definitely describe this as a growing crisis.”

The massing of more than 95,000 assault troops, backed by hundreds of tanks, armored vehicles, artillery and even thermobaric rocket batteries, are or are moving into a position to invade the beleaguered republic.

Meanwhile, in Ukraine, literally tens of thousands of Ukrainian troops – including reservists- have been called up to the border and U.S. advisers are believed to be “in the country.”

American intelligence assessments grade the threat of a major Russia-Ukraine flare-up as a “potential imminent crisis,” as stated by their European Operations Center EUCOM. An invasion of Ukraine would come after about 6 years of war between the two countries has raged along the 1,500 miles-long East Ukraine-Russia border since 2014 after the Euromaidan riots in Kyiv and the overnight and lightning Russian invasion of neighboring Crimea.

According to the latest reliable estimates, the six years of military conflict have produced brutal fighting and the modern equivalent to a trench warfare stand-off that has resulted in 14,000 deaths. In recent months the fierce frontline fighting has worsened Ukraine in the east by pro-Russian rebels, aided by Moscow’s GRU military intelligence spies. A full-fledged invasion would dramatically escalate the conflict into a war.

The United States has moved in response to the aggressive Russian moves sent two U.S. Navy ships into the Black Sea over the weekend, according to an announcement made by the U.S. 6th Fleet announced. 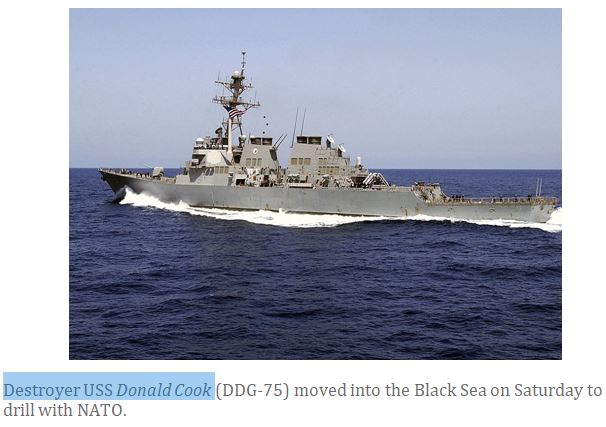 U.S. Commander Matthew Curnen of the Donald Cook said in a statement…

“This is exactly what we train for, and the opportunity to perform alongside allied surface and air assets is rewarding. I was impressed with the crew’s growing familiarity with NATO joint interoperability procedures, readiness to cooperate with friendly units, and excitement to perfect our tactical proficiency by real-world application.”

The USS Donald Cook (DDG-75) Arleigh Burke-class destroyer has also been moved into the Black Sea, and the fleet oiler USNS Laramie (T-AO-203) has been sent to join the two Navy destroyers.

Meanwhile, NATO’s E-3A Airborne Warning and Control System (AWACS) and a P-8 maritime surveillance aircraft that is part of the Navy’s Patrol Squadron (V.P.) 46 joined the drills, according to the 6th Fleet’s latest statements.

NATO allies, the leaders of several European countries like France, Germany, Belgium, and the United Kingdom keep repeatedly asking President Putin to pull back what increasingly appears to an invasionary force back from the Russian Ukraine Border.

There’s a growing concern that an all-out Russian invasion of Ukraine may be coordinated with Taiwan’s Chinese invasion. The Russian’s and Chinese appear to be posturing to test the resolve of NATO and the United States to defend Ukraine and Taiwan’s independence.