Late last night, President Trump threatened to call in the U.S. Army and suggested that looters be shot in Minneapolis in the aftermath of a police officer caught murdering George Floyd. At the same time, three either stood by and let it or assisting in the homicide.

Shooting people for stealing during a riot is the provenance of authoritarian dictators. It’s a policy that has been outlawed like hanging children for minor crimes or throwing people in prison for financial insolvency. 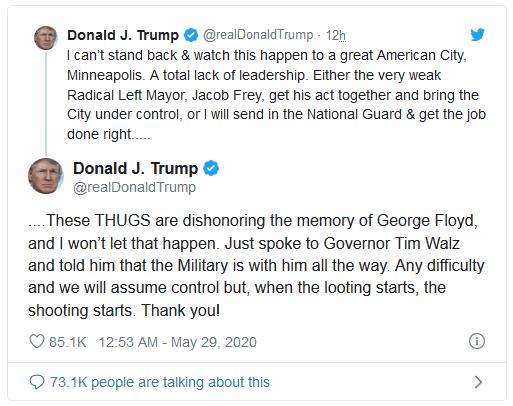 What is important to point out first,  the U.S. Army cannot be brought into the United States in the capacity of law enforcement. The Governor of Minnesota Tim Walz has activated 500 National Guardsman and can be activated to guard property and lives without them shooting thieves. Withdrawing the Minneapolis police from the area of protest and this outpouring of outrage over the murder of George Floyd and replacing them with Minnesota National Guard and insisting on the arrest of the officers could who committed the alleged murder would quell the violence.

Placing the officers under arrest, pending a grand jury, is the legally appropriate thing to do. The video proves that enough probable cause exists. Minutes ago, Minneapolis Police officer Derek Chauvin who was seen in a video kneeling on George Floyd’s neck to restrain him as he screamed he could breathe while being arrested. The arrest of the remaining three that helped or stood by and watched it happen; would help de-escalate the furor in the city.

Second, many cameras caught the faces of many of the looters, license plates. There’s plenty of time for State law enforcement officers to track down and arrest those guilty of looting -- after calm is restored to the city.

Third, shooting into a crowd to suppress property theft can result in innocent people being killed.

Yet, President Trump can offer no solution to the events unfolding in Minneapolis other than having soldiers shoot men, women, and children Black, White, Hispanic, Asian dead.

The Atlantic correctly pointed out today …

“Trump’s Looting Tweet Violates His Oath of Office. The President is supposed to protect and defend the nation’s supreme laws. Shooting looters is unconstitutional.”

In a 1966 interview, Martin Luther King Jr. was asked about some Black activists’ departure from the peaceful approach he advocated to address racial injustice…

“The cry of Black power is at bottom a reaction to the reluctance of white power to make the kind of changes necessary to make justice a reality for the Negro,” he said. In that interview, he called a riot “the language of the unheard.”

Civil unrest is happening because of all people of color, including the color white, are fed up with police taking justice into their own hands and killing people. We’re tired of watching videos of our brothers and sisters die at the hands of the police. We’re tired of having to deal with racism — especially amid a pandemic that disproportionately affects poor black and brown people — while some white people aren’t even aware of the mourning taking place.

Yesterday, I wrote about the CEO of Twitter’s complicity in allowing this authoritarian monster in the White House to continue to use Twitter’s platform to threaten, extort, blackmail, libel, and promote ridiculous conspiracy theories designed to intimidate his political critics and opponents.  Late last night, Trump posted a tweet on his Twitter account that threatened to have people shot.

It’s, for this reason, millions of Twitter users, and I want Jack Dorsey, Twitter’s CEO, to shut down Trump’s Twitter account. Call him on his threat to go to another platform. Reviewing his tweets, there’s a long history of Trump and his sons violating Twitter’s rules. The sooner their accounts are shut down, the better, especially now that he has issued an executive order that would force Twitter to continue to allow Trump to lie nonstop and unchecked.