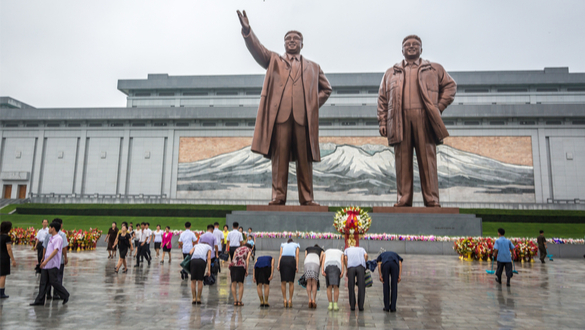 Instead of calling for the North Korean dictator, Kim Jong Un for being tried for crimes of humanity, Tucker Carlson defended the dictator as a great leader who along with his father and grandfather murdered millions as a means to an end to rule a country.

The white supremacist commentator was asked about Donald Trump’s close relationship with the dictator during a Fox News phone interview. Carlson answered in his duplicitous fashion…

Then he took to defending the North Korean Stalinist dictatorship…

“On the other hand, you know you’ve got to be honest about what it means to lead a country; it means killing people. Not on the scale the North Koreans do…

To emphasize his veracity, he went on to spew…

“I’m not a relativist or anything, but it’s important, to be honest about that.”

Then Carlson made the relativist argument …

“But many countries commit atrocities, including a number that were closely allied with.”

He went on to make more relativist arguments to defend Donald Trump’s closeness with the monstrous North Korean dictator, saying …

“It’s not necessarily a choice between the evil people and the brave people,”

“It’s a choice, most of the time, between the bad people and the worse people.”

President Trump has done everything but kisses dictator’s ass in Macy’s window while he stocks pile nuclear weapons and continue constructing missile bases while his people are heading into the eighth decade under this murderous Stalinist regime.

Because Carlson is focused on keeping his white supremacist base audience content, he never mentions the reality that both Kim’s father and grandfather used this same ruse of negotiation to get concessions from the Western Democracies to only unilaterally break the deal – until it successfully obtained nuclear weapons.

Mr. Carlson fails to recognize we have ceased military training exercises to show our intent is for a diplomatic negotiated denuclearization, while dictator Kim is still stockpiling up weapons-grade plutonium, is attempting to miniaturize nuclear ware heads so they can be installed on medium and long distance missiles and keeps on committing crimes against humanity.

Carlson isn’t a Republican; he isn’t committed to democracy or freedom here in the United States or North Korea. He’s committed to one-party rule in both countries — Kim’s horrific dictatorship and a Trump white supremacist Putin corrupt Kleptocracy.

So, the questions Tucker are…

·        How many children is it okay for this President to abuse and murder before it surpasses an acceptable number in running the United States?

·        How many rural hospitals can Trump and his deplorable GOP close before the deaths in Red State America reach a level that it’s not okay?

·        How many nuclear weapons will Trump allow Kim Jong Un to amass before the risk is too great?

Mr. Carlson, it may be fine with you that President praises dictators, maligns American War heroes like John McCain, and calls the free press the enemy of the people.

It’s not okay with any well-read or informed person that recognizes this entire North Korean effort is a narcissistic campaign to win a Nobel Prize in which Trump has fettered away the prestige and power of the Presidency.