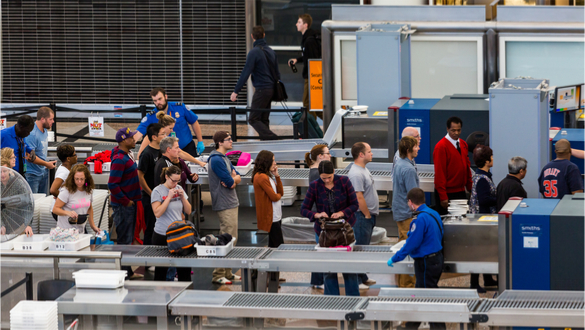 The danger is increasing at our nation’s airports as Transportation Security Administration agents have begun to shift from calling out sick to quitting their jobs as the result of the extreme financial hardships that have occurred to strangle them.

The American Federation of Government Employees (AFGE) issued a statement on Tuesday warning the danger of compromised safety is growing at of our nation’s airports as the federal government shutdown drags into week three and the likelihood of another payday passing without TSA agents being paid.

“Every day I’m getting calls from my members about their extreme financial hardships and need for a paycheck,”

“Some of them have already quit, and many are considering quitting the federal workforce because of this shutdown. The loss of officers, while we’re already shorthanded, will create a massive security risk for American travelers since we don’t have enough trainees in the pipeline or the ability to process new hires.”

Last week, the American Federal Government Employees union filed a federal lawsuit against the government for forcing federal employees to show up to work uncompensated, calling the demands “inhumane.” This lawsuit was filed by the union just as TSA agents were starting to skip work. Now the situation is escalating with employees leaving their employment permanently.

The danger to security and air transit is growing as fewer TSA agents are showing up for duty. Lines and wait times are starting to increase at our nation’s airports. AFGE National President J. David Cox Sr. offered the following analysis.

“It is completely unacceptable that the women and men who risk their lives safeguarding our airports are still required to report for work without knowing when they’ll eventually be paid again,”

“TSA Officers already have the least amount of rights of any federal officer, some of the lowest pay and highest attrition rates in government, and among the lowest morale of any federal agency. Working for weeks on end without being compensated ― while already being short-staffed ― only makes their situation worse.”

Meanwhile, White House counselor Kellyanne Conway appeared on FOX News today to assert her belief President Trump’s Tuesday night presidential address on border security was an absolute home run, even though her husband ruthlessly mocked and panned The President's speech. She went further, insisting that the President’s speech has convinced Americans of the real need to fund the president’s proposed border wall.

Conway during her Fox News appearance cautioned viewers to not pay attention to any polls that may come out in the coming days showing low support for building the wall. Conway is ignoring past polls that show that only 25% of the American public supports the construction of a wall and only 25% support its construction on the southern border if the Mexican government does not pay it. Undeterred by the facts Conway said….

“I know there will be some phony-baloney polling questions… to show that it didn’t move the needle, America’s against the wall, etc.”

Conway insisted that Democrats deserved intense criticism for things that they didn’t say about the situation at the border.

“They could not tell you zero people have been raped!”

She did not refer to her husband’s dissent with her and President Trump’s policies and opinions related to the partial government shutdown.