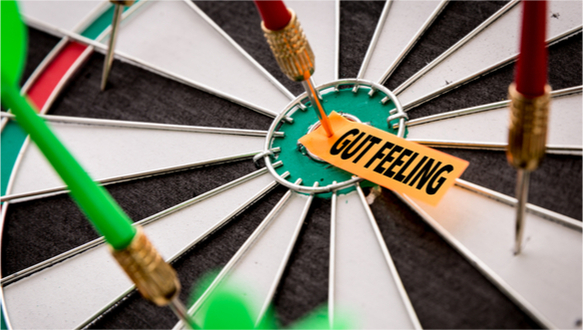 “I’m doing deals, and the Fed is not accommodating me. They’re making a mistake because I have a gut, and my gut tells me more sometimes than anybody else’s brain can ever tell me.”

Are you willing to wager your wealth on the brilliance of Donald Trump’s gut — informed by untold numbers of McDonald’s cheeseburgers? Sounds like a stupid question, but the president’s focus on his “gut feelings” raises important issues for you as an investor.

For one thing, setting aside the political context of assessing the genius of Trump’s gut, there are reasons to be suspicious of “gut feeling.” By definition, a decision informed by “gut feeling.” is guided by “prejudice” by pre-judgments apart from conscious consideration of any evidence. Or as Bayesian statisticians would put it, according to “prior probability.”

In the event that you are not a connoisseur of the works of Thomas Bayes, (1701 – 7 April 1761), he was a mathematician who was centuries ahead of his time as the author of An Essay towards solving a Problem in the Doctrine of Chances or A Method of Calculating the Exact Probability of All Conclusions founded on Induction (1763). Bayes was elected to the Royal Society in 1742 on the strength of his defense of the logical foundation of Sir Isaac Newton’s calculus.

Bayes’ approach to statistics involved “conditional probability.” Bayes great insight was that the probability of something occurring has to be updated in light of the “successes and failures” in the trials so far observed.

I suggested that Thomas Bayes “was centuries ahead of his time” because his hunch that more accurate predictions can be framed from knowledge of a problem’s “probability density function” is it itself calculation dense. Before the advent of computers in the second half of the 20th century, calculating current conditional probabilities was too complicated to perform on the back of an envelope, so decision makers  tended to rely on ‘prior probabilities” or “gut feeling.”

The record of history is replete with evidence that even divine geniuses can be misled by “gut feeling.” Consider Aristotle’s theory of gravity (which states that objects fall at speed proportional to their mass — in other words, that heavier objects fall faster than light ones).

Aristotle’s “gut feeling” that heavier objects fall faster than light ones commanded so much respect that it went untested for more than 1900 years. Galileo Galilei,' (then professor of mathematics at the University of Pisa), was initially inclined to believe Aristotle.

But rather than depend on his and Aristotle’s “gut feeling,” Galileo Galilei,' put it to the test (1598). In what is often considered “a turning point in the history of science,” Galileo dropped two balls — one of iron and the other of wood and thus considerably lighter — off of the Leaning Tower of Pisa. They both landed at the same time — thus disproving Aristotle’s gut feeling.

Similarly, Albert Einstein was world famous as a genius. But his “gut feeling” told him that quantum entanglement, what he derided as “spooky action at a distance” could not be true. Extensive experiments have shown that “spooky action at a distance” is, in fact, a feature of quantum mechanics, despite Einstein’s gut feeling that such a thing was impossible. (See https://www.sciencemag.org/news/2018/04/einstein-s-spooky-action-distance-spotted-objects-almost-big-enough-see).

The lesson from these examples is that even the “gut feelings” of world-historic geniuses — Aristotle, Galileo, and Einstein — were unreliable on issues subject to a bright line test. These great geniuses misled themselves and others.

The question for the thinking investor is, “Do you have any reason to suspect that Trump’s gut is better informed than those of Aristotle, Galileo, and Einstein? If you do, I would love to hear it.