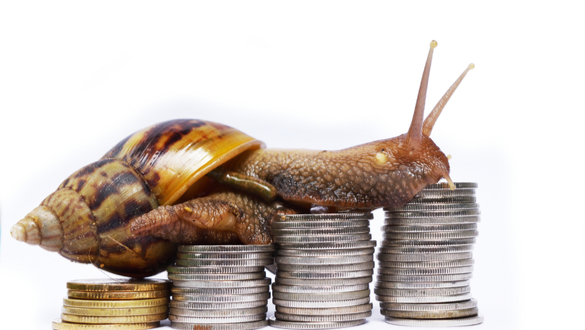 President Trump’s global trade war is turning into an economic train wreck. U.S GDP expansion estimated have grown by just 1.8% in the second quarter of 2019; down from 3.1%. Meanwhile, business investment is sagging and may have posted its first decline since 2016.

President Trump’s trade wars may be slowing down U.S. economic growth, and in the last quarter, it fell to match the slowest pace of his presidency. The U.S. consumer demand helped keep economic growth from taking a deeper nose dive.

Economists, Central Bankers and Wall Street are all bracing for the U.S. gross domestic product figures that will be released tomorrow that are expected to show business investment weakened, despite a late-quarter boost from higher equipment orders in June. The overall weakness in business investment is expected as a result of Trump’s global tariff war, especially with China. The uncertainty is slowing global growth, sending oil prices lower, and undermining business expansion.

The U.S GDP rose 1.8% on an annualized basis the slowest growth since 2017. This was likely a result of a decline in net exports, and a decline in inventories in April-June. The scary thing is the 3.8% growth may have been an aberration as companies stockpiled goods ahead of President Trump’s repeated tariff deadlines. 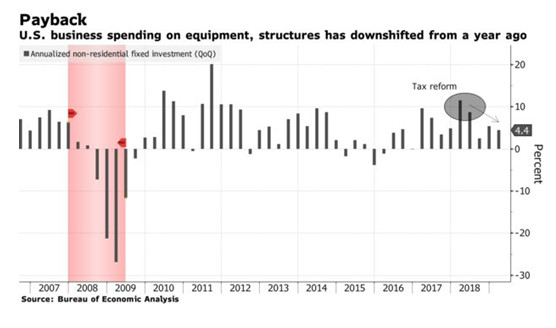 Ellen Zentner, the chief U.S. economist at Morgan Stanley, was quoted by Barron’s as saying…

‘‘The biggest factor weighing on growth is a rather sizable swing downward in inventories and net exports -- so they were the biggest contributors in the first quarter and they’ll be the biggest drag on the second quarter,”

Friday’s GDP report will not make much difference to the Federal Reserve that will be meeting next week when it is expected to cut interest rates by a quarter-point. However, a drop in business spending could provide more evidence that the U.S. economy is slowing and could push the U.S. Central Bank into cutting interest rates in September.

Throughout Trump’s 2016 campaign and repeatedly since Trump and his party have insisted they would kick-start tepid Obama-era economic growth. Specifically, they insisted tax cuts and deregulation would return growth to its post-World War II average of 3% — a level, candidate Trump said derisively, that President Barack Obama became “the first president in modern history” never to reach in a single year. In fact, Trump promised much higher economic growth several times when he was running for office…

“We're bringing it (the GDP) from 1 percent up to 4 percent. And I actually think we can go higher than 4 percent. I think you can go to 5 percent or 6 percent.”

Unable to fulfill his promises of economic growth and now facing an global economic slowdown Trump has begun to scapegoat his appointed Federal Reserve Chairman Jerome Powell for holding back the U.S. economic growth by not cutting interest rates.

It’s Trump’s trade war that’s in large part holding things back now. According to the Fed’s Beige Book and other anecdotal evidence, companies are hesitating to expand while they are waiting to see if the U.S. and China can resolve their differences.

Caterpillar Inc., for example, a frequent U.S. economic bellwether, said Wednesday that tariffs are boosting its production costs and competition in China is eating into sales.

The grounding of Boeing Co.’s 737 Max jets for safety reasons is also putting a huge dent into U.S. economic growth the U.S. aerospace company’s plane orders are slowing to a trickle.

Meanwhile, the Institute for Supply Management’s index of manufacturers’ new orders fell in June to the lowest level since 2015, suggesting the slowdown in global trade is causing broad factory weakness and will persist in coming months.

The widening of Trump’s trade war, reduced trade and the resulting reduction in inventory accumulation are believed to be responsible for having knocked as much as 1.7% off of U.S. growth.

Consumer spending and consumption is the only bright spot having rebounded from a low of 0.9% in first-quarter that was caused by President Trump’s long federal government shutdown and the extremely cold weather in large part of the U.S. in the first quarter of 2019. 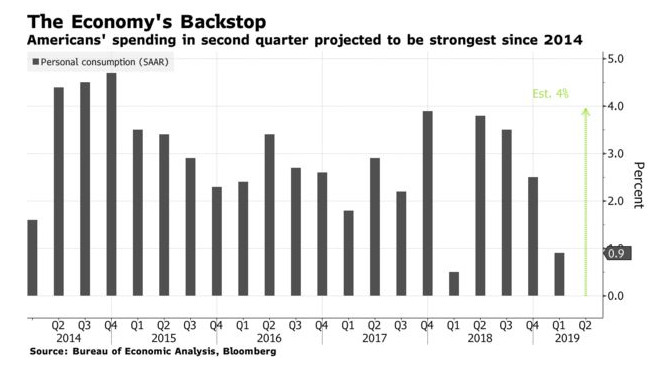