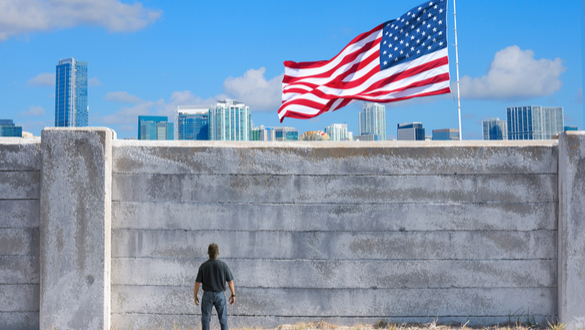 Reckless, dumb and driven by racial hatred of Latino’s Trump is willing to sink the U.S. and Mexican economies into a recession bragging he’s “not kidding about shutting down the southern border for a long, long time.”

President Trump's threat to close the Southern Border to keep asylum seekers from presenting themselves legally to U.S. border control agents could be one of the biggest mistakes he’s made in office.

"Our economies, communities, workforce, our businesses are so integrated. It's like dissecting a person. Dividing a person in half is not viable."

A border shutdown would be devastating for both the U.S. and Mexican economy. It would shut down as much as an average of $1.7 Billion worth of goods crosses back and forth between the two countries daily.

Trump’s threat comes as new caravans of asylum seekers looking to escape the violence of dug funded gangs and a deepening economic crisis’s in Honduras, Guatemala and El Salvador. Trump’s order to the State Department to cut off all financial aid to those countries designed to stabilize those countries politically and economically so migrants would not leave will make the situation much worse.

He ignores his Administrations “no tolerance” policy is making the situation worse. His administration’s kidnapping of child asylum seekers without any way of tracking them is evolving into a fascist policy that only serves to complement its policy of ripping babies and children and jailing them in human conditions including being housed for many weeks and months in cages.

The United States Border Patrol issued a statement Saturday confirming the Trump’s no tolerance policy is being overwhelmed by the influx of migrants and that most shelters are filled beyond capacity. So the agency has begun reverting to the pre-crisis policy of “processing non-criminal family units for immediate release."​​​​​​​

Trump’s determination to keep people of color, Latino’s out of the United States by any means necessary is designed to galvanize his core base of a white nationalist.  Trump is leaning supporters who believe that immigrants of color are the people that are committing crimes, importing drugs, murdering innocents and are stealing jobs from real Americans is the same ultra-right, Neo-Nazi gibberish.  It is the same ignorance that led to more than 60 million deaths in World War II in Europe and Asia.

Trump’s threat to close the Southern border, combined with his trade war with China and other of our biggest trading partners is already leading to the European Central bank pairing back estimates of global economic growth to 1%.

Investors should be deeply concerned by Trump’s approach on immigration and trade which is on course to cause a genuine recession here in the United States just as his reelection campaign hits full steam in the first quarter of 2020.