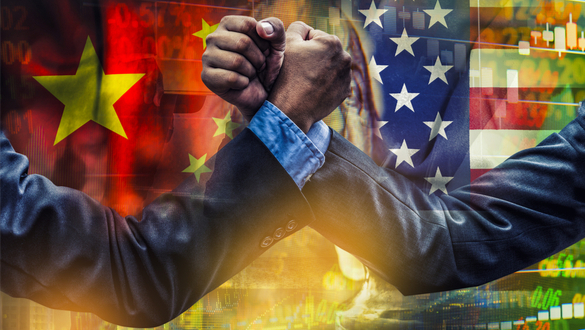 The President indicated today that he has no intention of rolling back all of the tariffs he has imposed on Chinese imports as part of ‘Phase 1” of an initial trade agreement. Trump still hopes to sign an agreement with the Chinese at the end of the month. His unwillingness to end all the sanctions he imposed on Chinese imports last summer could lead to a collapse of current negotiations.

President Trump continues to claim to be in the driver’s seat in trade negotiations with the Chinese to settle the current trade war. Once again, claiming the ‘Chinese want a deal more than he wants a deal.”

The President continues to insult China’s President Xi Jinping by questioning openly what tariffs if any, he is willing to roll back for a ‘Phase 1’ trade deal. Trump proved again to be reckless in his hyperbole after his negotiators acknowledged on Thursday that the Trump administration would eliminate some tariffs if a deal were reached.

What portion of the tariffs will be canceled and when,  remained a source of debate within the administration?  President Trump’s commented that he was unwilling to do away with them entirely and maybe not at all is the perfect recipe for another collapse in negotiations.

Mr. Trump told reporters before departing the White House on Marine One today...

“They’d like to have a rollback — I have not agreed to anything,”

“China would like to get somewhat of a rollback, not a complete rollback, because they know I won’t do it,”

Trade and market analysts expected the Trump Administration would roll-back America’s tariffs over time as China met certain benchmarks and demonstrated that it is keeping its commitments to respect American intellectual property, open its markets to foreign firms, and purchase $50 billion of agricultural product from the United States. However, the Chinese may see that approach as an insult and not enough to sign off on ‘Phase 1’ of a trade deal.

This was reinforced by the Chinese government on Thursday via its Chinese news agency by asserting both sides had committed to removing some tariffs as part of any deal. But the China hawks among the President’s advisers are urging him not to remove any tariffs, even though the trade war is already pushing the global economy towards a recession and is taking a toll on the American economy.

President Trump’s political advisers are warning him that if he continues to wage this trade war, which is inflicting pain on farmers and manufacturers, he will be hurt him politically as he heads into re-election. American farm bankruptcies are now running at 33%, the worst levels since the 2008-2009 financial crisis and aftermath.

The division between Trump’s China hawks and his moderate political advisors has members of the administration contradicting the President. For example, Larry Kudlow, the chairman of the White House’s National Economic Council, told Bloomberg News on Thursday…

“If there’s a Phase 1 trade deal, there are going to be tariff agreements and concessions.”

Later on Thursday, Peter Navarro, one of Mr. Trump’s hawkish trade advisers – who has been accused of being as being intellectually dishonest and phony in his many books, said that it was too soon to say that tariffs would be rolled-back. He added to the confusion by sending an email to members of the media on Friday in which he lamented that initial reports about a tariff rollback were triggered by “propagandists within the Chinese government.”

“This claim was simply false,” Mr. Navarro said. “There was no such agreement.”

Hilariously with all confusion and no deal even close to being agreed to, there has been wide speculation as to when and where a deal might be signed.

Mr. Trump said that if a signing ceremony with Mr. Xi takes place, he would like it to be held in the United States, in Iowa, in “farm country” would be preferable…

“It will be in our country,”