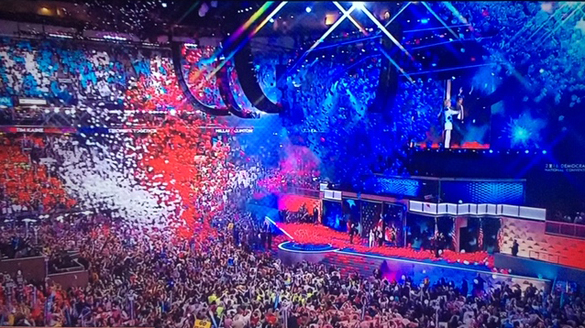 Trump’s Ego-Driven Convention that Never Was, A Presidency that Shall Reign Nevermore!

There’s a long history of both Democrat and Republican candidates getting a boost in their polling after their parties national conventions every four years. So far, there’s no evidence that this year’s Republican National Convention is doing anything to improve President Trump’s popularity or a surge in his polling.  There doesn’t appear to be any indication that he has gotten even a small bump; he still clearly trails former Vice President Joe Biden.

President Trump finds himself in the position at this point of needing to become the first incumbent occupant of the White House in over 70 years to come from behind after trailing following both major political party conventions.

A new ABC News/Ipsos poll is especially harsh for Trump. Although it did not poll for the election, it stuck to polling the two candidates’ favorability ratings.

1.     Among all Americans, responses to the RNC are more negative than the DNC. Slightly more than one in three Americans (37%) approve of what the Republicans said and did at their convention, compared to 59% who disapprove. The contrast to the aftermath of the Democratic National Convention is stark when polling revealed 53% approved of the Democrats’ message. 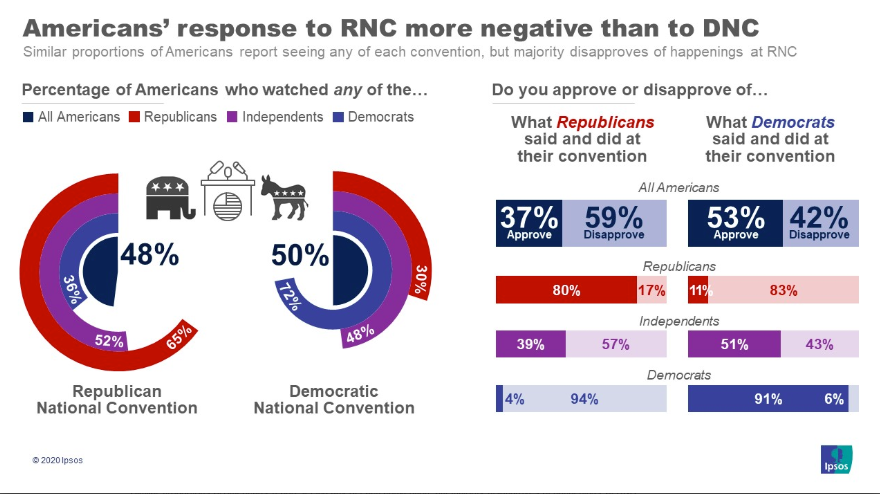 3.     The RNC number one mission was to broaden their political popularity and expand the number of voters for Republican candidates. This priority seems to have escaped their efforts. The hostile tone of the RNC appears to have only appealed to Republican viewers.

·         While the majority (59%) of those that watched a lot or some of the convention approve of what the Republicans said, it’s vitally important to understand the viewership of the RNC was made up of nearly twice as many Republicans as Democrats. (65% vs. 36%).  The fact that 48% of Americans report watching at least some of the RNC, similar to DNC viewership, which counted 50% of Americans, hasn’t changed anyone’s opinion on who they will vote for on November 3, 2020. Election Day.

·         Eighty percent of Republicans – regardless of whether they watched the convention or not – approve of the Republicans’ 2020 campaign message.

4.     Biden’s and Trump’s standings, along with their running mates, remain unchanged from after the DNC. A sign of how entrenched voters are at this point in the election, but the numbers are not good for the incumbent President Trump…

The significant number not reported in most polls and stories online or in the broader media is that President Trump finds him in great peril with independent voters for two reasons...

·         First, independent voters being polled favor the Democrat nominee of President former Vice President Biden by a 66% to 33% margin.

·         Second, independent voters are much more likely to vote for the former vice president than President Trump. They are much younger and represent a much more racially diverse. They have also grown in numbers in key states like Pennsylvania, New Hampshire, Maine, North Carolina, Georgia, Florida, and Wisconsin that they outnumber Republicans in those states that are registered. If Biden holds the two-thirds advantage in voting with independents, he will become the 46th President of the United States.

For more information on the ABC News/Ipsos poll go here