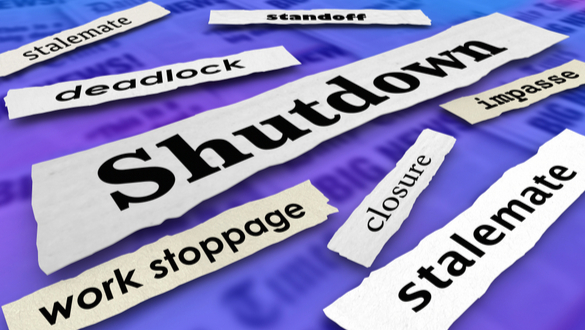 AP-NORC poll: 6 in 10 Americans blame Trump for the shutdown while disapproval of Trump’s President’s job performance has risen to over 60% and his approval numbers sink to 34%.

The latest AP-NORC Center for Public Affairs Research Poll considered a considered by most polling analysts to a be an “A” quality poll showed that only 34% of Americans approve of Trump’s job performance in a survey conducted by The Associated Press-NORC.

The President’s approval number is down 8% from the 42% polling result from a month ago and is now nearing the lowest polling results of his presidency. The president’s approval among Republicans has also fallen from 90% to 77% showing cracks in support from his base. Meanwhile, his standing with his with independents is hitting the lowest readings since he began his time in the oval office.

Form a historical perspective President Barack Obama approval numbers never fell below 40% in polling by Gallup. Trump numbers are still not as bleak as those suffered by, five previous presidents since Gallup began measuring presidential approval. Harry S. Truman, Richard Nixon, Jimmy Carter, George H.W. Bush, and George W. Bush all saw their approval numbers fall into the 20s at least once during their time in office. Meanwhile, Trump’s approval numbers via Gallup polling has never reached 50%, distinguishing him as the only president not to have reached 50%.

The polling numbers aren’t likely to get any better for President Trump after Air traffic controllers, pilots and flight attendants unions issued a dire warning about the safety of air passengers during the partial government shutdown on Wednesday night…

“In our adverse risk industry, we cannot even calculate the level of risk currently at play, nor predict the point at which the entire system will break. It is unprecedented,”

Air traffic controllers, Transportation Security Administration (TSA) agents, transportation security and law enforcement officers, safety inspectors, air marshals and FBI agents who have all been caught up in President Trump’s partial shutdown also issued a joint statement  pointing out the danger of allowing airports to understaffed and pointing to the safety dangers being created in nation’s aviation system.

Air traffic control facilities are facing a 30-year low staffing low while at the same time hiring, and Trump’s government shutdown freezes training. Air traffic controllers are working tremendous overtime to keep airports running as smoothly as possible, but the danger is growing as stress over workers finances continue to be a growing daily concern.

Many airports are being forced to close security checkpoints as the result of an increasing number of TSA sickouts – and a growing number of TSA screeners not showing up for work due to the financial burden of working without pay.

Another rising concern is the safety reporting data is likely to be affected by strains on Federal Aviation Administration resources.

“As union leaders, we find it unconscionable that aviation professionals are being asked to work without pay and in an air safety environment that is deteriorating by the day,” the union leaders said. “To avoid disruption to our aviation system, we urge Congress and the White House to take all necessary steps to end this shutdown immediately.”

The union leader’s message was also reinforced Wednesday by five former Department of Homeland Security secretaries, who drafted a letter to the Trump Administration and Congress insisting of the imperative of restoring funding for the agency’s security, law enforcement, and emergency preparedness work, which also extends to aviation security.

“We call on our elected leaders to restore the funding necessary to ensure our homeland remains safe and that the Department’s critical national security functions continue without compromise,” they wrote.”

With concerns and the dangers growing across the board, the President, however, seems undeterred. Reports from inside the White House last night indicate he plans to keep the government shutdown for weeks, even months.

Speaker Nancy Pelosi, who is for all intense purposes the leader of the Democratic party and her leadership are preparing a counteroffer to give to Trump that would "meet or exceed" $5.7 billion in spending on border security. The measures would not include funding for a border wall.

While the Democratic leadership works on a counter-proposal, the U.S. Senate is preparing to vote on two competing proposals to end the shutdown on Friday. The first bill is backed by the by Republicans and the other by Democrats.

The GOP bill being proposed would give Trump the $5.7 billion he’s demanded for a wall along the southern border, while the Democratic plan would reopen the government through Feb. 8 allow federal employees to catch up on what would be two paychecks, but the proposal doesn’t provide funds for the Trump wall but would allow for negotiations to continue. However, neither bill proposed is expected to get the 60 votes needed to pass which guarantees this Trump Shutdown will continue for another week.