Trump’s Next Possible Fed Nominee is Not an Economist 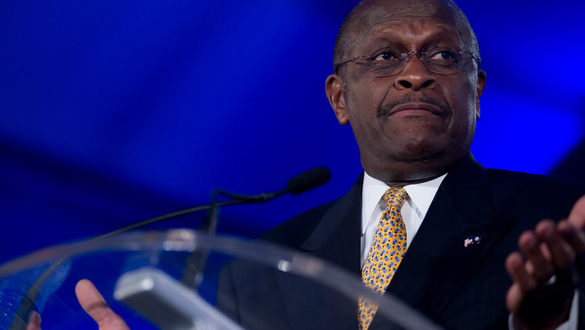 Herman Cain was forced to withdraw from the 2016 GOP Presidential primary because of sexual harassment claims. He has no formal economic training and is a purely political appointment that will politicize the Federal Reserve for the first time.

President Trump once again proving he knows little or nothing about the Federal Reserve or economic wants to nominate former Godfather's Pizza CEO and 2016 Republican presidential candidate Herman Cain to the Federal Reserve Board. Saying yesterday…

"I find Herman to be an outstanding person. I would think he would do very well there."

Herman Cain has however served as chairman of the Federal Reserve Bank of Kansas City, an appointment that was viewed as wholly based on patronage, substantial contributions to the GOP.

During the 2016 GOP primary, he campaigned on a "9-9-9" tax plan” but dropped out of the race after allegations that he sexually harassed women and cheated on his wife — allegations Cain denied as far back as 2011.

Trump suggested those old sexual harassment claims would not disqualify Cain from being confirmed by the Senate to the Federal Reserve.

"He's doing some pre-checking now, and I would imagine he'd be in great shape."

Cain’s pre-checking could be tied to how many of the women will come forward to accuse him of sexual harassment should he accept the President’s nomination.

The nomination would once again be a motivated political appointment and not based on his actual qualifications. This kind of political appointment to the Federal Reserve will likely come under fire by many Senators who will point out that Cain lacks the serious economic background to do the job.

Cain is anything but an economic scholar. He criticized Federal Reserve policies in the past. In a 2012 Wall Street Journal column the U.S. should return to the gold standard.

Stephen Moore is a conservative commentator at the Heritage Foundation, and as such is considered as another effort on the part of President Trump to install political loyalist to the Federal Reserve who lacks the economic credentials for a Fed post. Complicating his nomination will be the fact that he owes the IRS more than $75,000 in back taxes.

Wall Street Rebel’s sources point out that neither Moore nor Cain has officially been nominated to the Federal Reserve Board and one or both nominations could be short-circuited by their lack of qualifications and questionable realities underpinning their ability to be confirmed by the Senate.