Trump’s New Plan: Have Ivanka Run for President in 2024 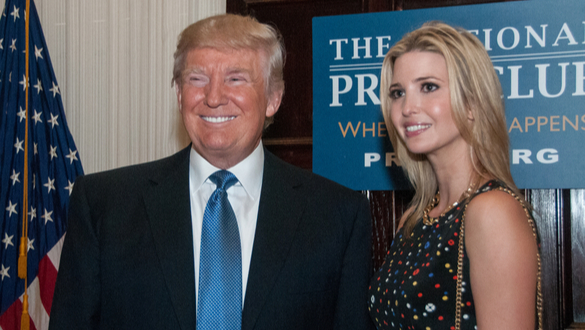 Trump refused to endorse Mike Pence for President in 2024 because he believes he will able to get his sycophant followers to support Ivanka’s candidacy.

When President Trump refused to endorse Mike Pence for the 2024 nomination he gave a strong signal that he is serious about helping Ivanka to fulfill her fantasy of running for President in 2024.

This explains the handbag entrepreneur’s constant travel and attending important international events like the G20’s meetings alongside her father, even being in the room on Sunday for the meeting with North Korea’s dictator Kim Jong Un.

According to Wolff, both Ivanka and Jared have their futures all figured out. The couple has “made an earnest deal” that Ivanka will run for president before Jared. She wants to be “The first woman president.”

The reactions to the Ivanka’s presidential ambitions were best summed up by Republican strategist Rick Wilson who told CNN during an interview, that Ivanka “is much more likely to be driving a Volvo … to visit her husband in a correctional facility than she is to be president of the United States at some point”.

The Guardian asked the appropriate question over a year ago, as Michael Wolff’s exposed Ivanka’s presidential ambitions…

Does a woman who sells strappy sandals and Instagram motivational quotes while dabbling in an unpaid internship in the White House seriously think she deserves the highest office in the world?

George Conway monikered the President ‘Deranged Donald’ for good reasons, including Trump’s belief that his daughter is so irresistible, well regarded by both a majority of American voters and the leaders of the international community that she could run and win the presidency in 2024.