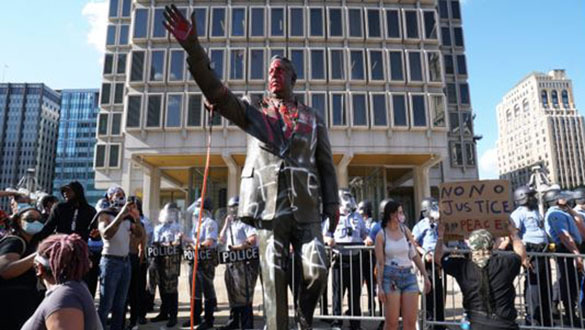 Please pay close attention to the video footage Trump wants to use to show how tough he can be, and it will demonstrate the horror four more years how he wants his dictatorship to look.  Like many of his fascist predecessors, their legacies lie in humiliation.

Watching the video of the Navy Veteran, Annapolis Graduate, 53-year-old Christopher David being beaten and sprayed with chemicals for simply protesting peacefully and or for having the audacity of trying to ask them a question is a glimpse of tyranny ahead. David did not fight back. He fought off the gas attack and walked away, flipping his assailants a double bird salute.

It may not have been intentional, but it was one white man’s poignant tribute to the Conscious of the House of Representatives, John Lewis.

Mind you, Trump’s fascist paramilitary agents are being told by their superiors they’ll not be prosecuted for the crimes they have already and will commit. They have immunity. They know better, they took an oath and are breaking it.

Those federal agents caught on film assaulting innocent protestors will stand trial for the crimes they commit in violation of their oath of the office like the officers who murdered George Floyd. Are these agents willing to proactively arrest the 69 million people who will vote against their Commander and Chief on November 3, 2020?

This all drips with the irony that President Donald J. Trump is making clowns out of these federal agents. While he has them behaving like Stalin’s KGB, he’s not holding, Vladimir Putin responsible at all for placing bounties on the lives of Americans and coalition soldiers.

Veteran discusses getting hit by unmarked police in Portland

In addition, Trump is on the brink of instigating a naval war with China in the Pacific. That may be a diversion used later to take attention away from what Ghislaine Maxwell might have on him, or from Michael Cohen’s book will reveal.

Also,  with all this going on, President Trump announced at yesterday’s press conference that he’s going to send hundreds of federal officers to the streets of Chicago to arrest “murderers and violent criminals” who, he claimed, “are breaking a wide range of federal laws.

Trump is looking to shake down the entire country to show how tough he is. I remember Kent State like it was yesterday. It’s just possible Trump saw the Kent State attack on student protestors and other Vietnam putdowns of innocent protestors as a decisive and positive time in U.S. history. One which, if he emulated, would show his courage, strength, and presidential fortitude.  He wants to desperately be seen as the ‘Law and Order’ candidate on Election Day.  And he has only so much time to imprint that image in voter’s minds.  It’s not going to fool anyone.

If Trump is seeking this ‘Law and Order’ legacy and voter approval, I wish to remind him of one of his idols he compared himself to a few months ago; Frank Rizzo, mayor of Philadelphia. Mayor Rizzo’s statue was recently removed in the middle of the night after the voters displayed their indifference and disdain towards his memory and legacy.