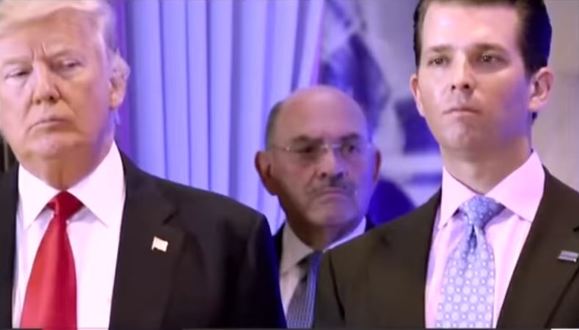 According to The New York Times, several sources confirm the heat is on former President Donald Trump, now that his business may be indicted for tax fraud, money laundering, including for fringe benefits provided to Trump Organization's chief financial officer Allen Weisselberg and other company executives, including private school tuition for the CFO's grandchildren, apartment rents and car leases.

The initial indictment is likely the first move by New York City and State prosecutors investigating whether those perks were recorded correctly in the company's books and whether taxes were paid on them. Manhattan district attorney Cyrus Vance Jr. and lawyers on his staff met with Trump's lawyers on Thursday in hopes of persuading them to drop the criminal case -- a routine development in white-collar criminal investigations.

Trump's lawyers are delusional to their client; Vance's office has been investigating Trump and his family business dealings for years. He has been stonewalling using Executive Privilege at every turn while he was a sitting President. The news that the indictments are about to be handed down comes as a warning from a key Republican pollster that the Republican Party continues to suffer damage from their continued close association with Donald Trump. The GOP's prospects of reclaiming power in upcoming elections could turn into slaughter for the grand old party.

According to a report in the Washington Examiner…

"In a blunt statement Ed Goeas, co-director of the Georgetown University Battleground Poll stated the GOP has a shot in 2022's midterms if they can hang on the base and bring back disaffected conservatives who fled the party during Trump's four tumultuous years. We need Trump to go away to get them,"

Goeas went on regarding his prediction of Trump's alienation of female voters and his botching of the COVID-19 pandemic that left over 600,000 Americans dead….

"One of the unfortunate legacies of the Trump administration is undermining faith for many partisan Republicans in all government," he explained. "The high unfavorable rating for [coronavirus Dr.] Anthony Fauci among GOP partisans is a clear manifestation of this legacy. While skepticism about the government will always be a hallmark of Republican politics, there should be more room than there is now for faith in limited government."

Goeas also pointed out that former President Trump's four years of unbridled spending combined with a tax cut for the rich has taken away one of the GOP's traditional weapons, saying…

"I mean, he spent money like a drunken sailor, which is what we used to say about the Democrats. And so now, trying to go after Biden on some of his spendings, although he's spending even that much more, it just rings hollow after the last four years of us never mentioning spending."

"There is real value for Republicans to be for things and not just stand in opposition to Democratic proposals. Voters have not fully embraced President Biden and his agenda. They remain notably concerned about pocketbook issues and their personal financial security. Republicans who are helping find solutions that improve the financial lives of voters will see their standing with voters rise."

The criminal indictment of Trump's business and its executives, including his executives and three oldest children, won't help the former president's approval numbers; he could face a 60%-65% disapproval numbers and drag the GOP down across the board.

Trump is planning a new series of rallies around the country in front of his MAGA supporters. Doing so will mean he'll be complaining about how he has been mistreated with the "greatest witch hunt in history" as one Trump acolyte after another turns on him could backfire on Trump and the GOP.

Trump is not talking about policies while President Biden and the Democrats are passing and signing into law a series of job-creating legislation, criminal justice reforms, and executive actions to fight crime.

The only way for Trump to get out of this and other criminal prosecutions is to re-installed as POTUS in the next few weeks. That's why he's been eating up the delusion.  It may also explain why his daughter and son-in-law have been drifting out of his orbit.