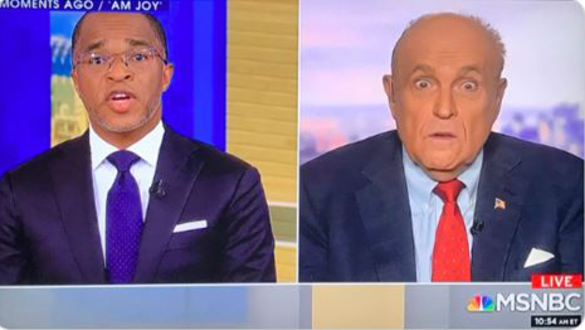 Nancy Pelosi was right when she told President Trump to his face that all his roads lead to Putin. His lawyer Rudy Giuliani declares he had no idea he was dealing with an active Russian intelligence agent.

Rudy Giuliani was confronted Saturday morning by MSNBC’s Johnathan Capehart over a Treasury Department report that identifies and sanctions an ex-Ukrainian Andrii Derkach for being “an active Russian agent,” pushing “false and unsubstantiated” corruption claims about former Vice President Joe Biden in a bid to influence November’s election.

Giuliani re-action was to continually talk over Capehart with wild unfounded wild accusations and conspiracy theories about former Vice President Joseph Biden, all of which are backed up by Russian propaganda. Giuliani’s insanity during the interview forced Capehart to cut him short and move directly to Lev Parnas for his re-action to Giuliani’s rant.