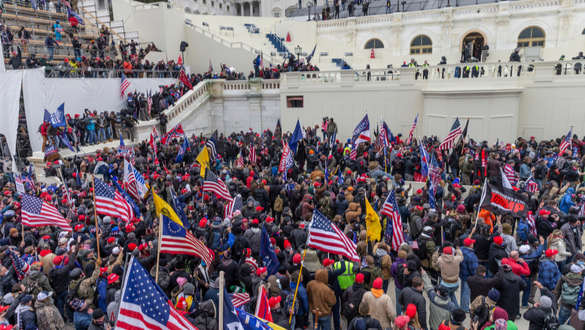 The Capitol had been besieged for the first time since the British set fire to Washington in 1814. The president's dereliction of duty and remarks to his fellow patriots added fuel to the fire on January 6, 2021.

On the afternoon of January 6, as Trump's patriots (rioters) broke into the Capitol building, Secret Service officers guarding Mike Pence on Capitol Hill felt so threatened that some called their families to say their final goodbyes, just in case. A few minutes later, while President Donald Trump was still in the White House watching the crowd on his TV, he sent out a tweet that put an even larger target on the back of his vice president.

Much evidence was presented during the Thursday hearing. Among that information were behind-the-scenes revelations regarding how President Trump reacted or chose not to respond as a crowd of fans approached the Capitol. It gave the impression that the president was aware of what was taking place a few miles away within fifteen minutes of beginning his speech.

It was made quite apparent by the committee, through the testimony of various Trump staffers, that the former president did not view the activities of his fans at the Capitol as an issue. And according to the testimony provided by Pat Cipollone, Trump was the only person at the White House who did not want the mob to be removed from the seat of democracy.

The panel showed disturbing video and audio of the violence inside the Capitol building as Trump supporters clad in body armor fought against law officers to maintain Trump's hold on power. In a heartbreaking revelation, the panel stated that members of former Vice President Mike Pence's Secret Service unit that day made calls to family to bid them farewell as the mob advanced.

Trump was sitting about doing nothing at the White House as the turmoil unfolded, but he was watching it all on television turned to Fox News. From a small dining room near the Oval Office, he ignored calls from his closest advisers, congressional Republicans, and even his own children to intercede and call off the bloodshed. According to never-before-seen excerpts from a taped address, Trump refused to concede that the election was over 24 hours after the polls closed. According to the committee, he only changed his mind and consented after it became apparent that the coup had failed.

The committee established that the president willfully rejected their efforts to persuade him to mobilize a response to the deadliest attack on the Capitol in two centuries by calling on a cast of witnesses assembled top Trump aides, veterans and military leaders, loyal Republicans, and even members of Mr. Trump's own family. This allowed them to establish that the president acted of his own volition.

It provided evidence of the pressure campaign that Trump led against state and local authorities in places where Biden had previously won, intending to convince those officials to change their electoral votes. It provided a description of his efforts to influence officials at the Department of Justice to participate in his plot. And it showed how, as the day drew nearer for Congress to count the electoral votes, Trump began publicly and privately pushing his vice president to reject or delay the proceedings. This unprecedented act would have been "tantamount to a revolution within a constitutional crisis," according to one witness who testified before the panel in June.

The purpose of the panel as a whole was to provide the citizens of the United States and the historical record with a comprehensive public accounting of the events that took place on January 6.

Despite this, its task is not yet finished. The committee is constantly getting fresh information, and on Thursday, they announced that they would begin holding public hearings in September.

Liz Cheney, a Republican from Wisconsin and the committee's vice-chair, stated that the committee would spend the month of August "pursing and combining information" before getting back together for additional hearings in September. "There is a great deal more work for us to do. We have much more evidence to share with the people of the United States, and we still have more to gather," she added Thursday.

Lawmakers have stated that the committee would only publish a preliminary report by the end of September and that it will publish a comprehensive report by the end of the year. This is in contrast to the initial plan of the committee, which was to provide a final report on their investigation in September. The committee is required to publish a comprehensive report before its dissolution, which is scheduled to occur in conjunction with the beginning of the new session of Congress in early January.

On Monday, Mississippi Democrat and committee chair Bennie Thompson told reporters, "We're just getting a tremendous quantity of information we didn't have access to." "We are unable to reach the timeline that we believed to be hopeful." Thompson is a member of the House of Representatives from the state of Mississippi.

However, the committee has already produced material that legislators and aides have said would serve as the basis for a criminal case to be brought against the former president. It has been suggested that probable charges include conspiring to deceive the American people and obstructing an official process of Congress. These are just two of the possible charges. At the most recent hearing, the committee disclosed that President Trump had tried to get in touch with a witness helping it with its investigation. This revelation prompted the committee to raise the possibility of witness tampering.

On Thursday, Thompson stated that "the facts are plain, and there is no room for ambiguity."

The Department of Justice is conducting a separate investigation into the events that took place on January 6. This investigation has already led to the arrest of hundreds of people, including the rare filing of seditious conspiracy charges against the leaders of violent far-right extremist groups involved in the Capitol breach.

Merrick Garland, the Attorney General of this country, stated on Wednesday, "No individual is above the law in this country." "There is no other way for me to put it," the speaker said.

Donald Trump's staff prepared a statement for him to read to the nation the day after the attack on the Capitol on January 6, 2021. The statement was intended to reassure a country shaken by the attack that an orderly transition was now underway to Joe Biden, the election winner, in November 2020.

This election has now come to a close. Trump was supposed to notify the American people that Congress had validated the results. But he was unable to complete the task. Trump petulantly exclaims in an outtake of his address, "I don't want to say the election's done." He is unwilling to submit to a peaceful transfer of power, even after the attack the previous day on American democracy.

During the investigation into the attack on the Capitol, the House committee investigating the incident aired outtakes from the recording on Thursday evening. These outtakes demonstrated the former president's exasperation and anger as he struggled through his script. He tightened his grip on his jaw. He pounded the palm of his right hand on the podium. Ivanka Trump, the president's daughter, provided him advice from the stands.

An unusual and hitherto undisclosed glimpse of Trump's conduct in the immediate wake of the attack on January 6 was afforded to the public with the tape's publication.

Not the afternoon before, protesters armed with batons, flagpoles, and bear spray were still rampaging through the halls of government, searching for his own vice president to capture. And not even on that day, as custodians cleaned up the debris and blood that had been left behind in the empty Capitol building.

President Trump immediately went back on his commitment. It has been 2,009 days since that faithful day in 2017, and the United States is still deliberating on the fallout.

A dramatic conclusion was reached by the panel on Thursday, arguing that President Trump violated his oath of office and was negligent in his duties when he failed to take action for 187 minutes on January 6, when protesters carrying poles, bear spray, and banners supporting his campaign led a bloody assault on the United States Capitol. The panel's argument came as the dramatic capstone of the day.

Throughout the course of the hearing, there were several different references to oaths, including President Trump's oath of office, the oath that members of his cabinet take, the oath that members of law enforcement and Congress take, and the dereliction that results from failing to honor one's oath. The committee contrasted President Trump's silence with that of past leaders who, in the words of Representative Elaine Luria, "respected their oath" on that particular day. Pence exerted effort with the hope of mobilizing law enforcement and military personnel to the Capitol building. According to a video that had never been seen before, Senate Majority Leader Chuck Schumer and Senate Minority Leader Mitch McConnell participated in a call with acting Secretary of Defense Chris Miller to discuss how quickly they could resume the joint session and finish counting the votes. The conversation was recorded and made public.

But just in case the committee's criticism wasn't directed in the right direction, the committee members didn't pull their punches as the meeting concluded. Rep. Adam Kinzinger referred to President Trump's delay on January 6 as "a failure of duty," and he underscored the reason why they were concluding the summer hearings with a focus on this particular subplot of the January 6 insurrection.