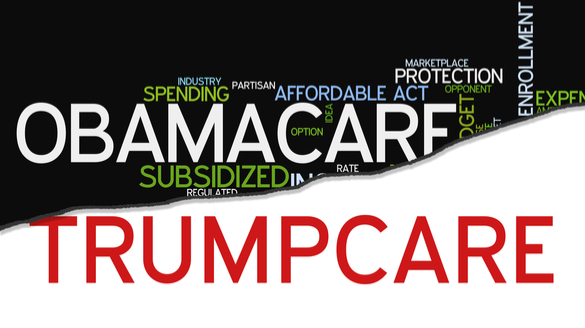 If you're one of the 60% of Americans in this country polled by ABC/Washington Post who have had it with President Trump’s lies and are wondering why 90% of GOP lawmakers and registered voters are still going along with his incompetent, reckless, pathological, and childish narcasisim. The answer may be coming into focus as the mid-terms approach.

The GOP is determined pay for its $1.3 Trillion tax cut it gave to the mega-rich this past year. Shockingly, their plan will doom the  many millions of Americans with pre-existing health conditions to shortened lives, misery from lack of medicines, and medical care.

Trump promised… “Better health insurance coverage for less” and it was going to be “So, easy to do” with a big smirk.

Trump's promises about his delivering better health insurance is one of the many promises he hasn't deliveerd on. Instead, after being elected President, Trump's and GOP’s solution for a healthcare turned out to be the opposite of what he and they promised.

They boldy released a sketchy poorly laid out plan that  to actually cut healthcare coverage for most Americans, while at the same time, literally raising the net cost for their coverage.

Trump and GOP lawmakers in Congress proposed "reforms" would have not only created a bigger healthcare disaster than the one we have been dealing with, their plan would have cost hundreds of thousands of jobs.

The Trump, GOP health plan reform defeated by one vote (John McCain) would have made it much more expensive to hire people with pre-existing conditions for employers currently providing comprehensive health insurance benefits.

The net result would have forced hundreds of thousands of employers to either ... eliminate health insurance benefits for their employees or provide cheaper limited benefit insurance policies that are almost worthless... or rule out hiring employees who have pre-existing conditions, and weed as many off their pay rolls.

Now as the mid-terms approach the GOP is employing the same cynical campaign lying strategy used by President Trump in 2015/16. GOP candidates all across the country are taking the up President Trump's promise voters they are all about providing affordable, reliable health care to Americans…

And a long list of GOP Candidates all across the United States running for Congress and the Senate are promising voters they will look out for people with pre-existing conditions at the very same time, they are doing everything they can to pass legislation, fight court battles and create regulations that would leave, what is believed to be as many as 80 million American’s with health insurance coverage for pre-existing conditions.

Josh Hawley, running for the U.S. Senate against incumbent Democrat Claire McCaskill insists he's all about making sure everybody can get health insurance, regardless of their medical status saying earlier this summer...

“We need to cover pre-existing conditions”

Besides NOT including the word “affordable” or addressing the cost of the insurance,  Hawley the current Missouri attorney general is one of 20 other officials in his state that signed onto a new lawsuit seeking to eliminate the Affordable Care Act’s guarantee of coverage, which they argue is unconstitutional. Hawley is also a longtime supporter of Congress repealing the law outright and actually told supports last year …

For millions of people with pre-existing conditions, destroying Obamacare and making it impossible for them to obtain health care insurance means they would be facing a death sentence.

Re-electing a GOP controlled Congress and Senate would be a premature death sentence for millions of Americans.

The truth is President Trump, Josh Hawley, Mike Braun, Martha McSally, Patrick Morrisey, Rick Scott and other Republicans have absolutely no plan of replacing the Affordable Care Act (ACA) something that would provide the same kind of access to medical care, medicines or treatments.

If the GOP insists on using the same strategy of just outright lying about their healthcare plans to bamboozle American voters, they will make it impossibly expensive for people with cancer, diabetes and a variety of other chronic conditions would have a much tougher time getting comprehensive coverage.

The GOP determination to sentence tens of millions of people to early deaths is continuing while they lie to voters in hopes of screwing them over after the 2018 midterm elections.

Just this past week, Vice President Mike Pence promised to take up repeal of Obamacare in 2019 if the GOP still controls Congress. At the same time, VP Pence and the rest of the  Trump administration is actively using its executive authority to undermine pre-existing condition protections unilaterally ― most recently, by effectively creating a parallel market with plans that don’t live up to the ACA’s standards.

These plans generally aren’t available to people with pre-existing conditions and don’t include many essential benefits, which means people who manage to get them are risking financial ruin if they get seriously ill. And by drawing healthy people out of the broader pool, these new plans will force insurers to jack up rates, forcing people with pre-existing conditions to pay more for coverage.

Ironically, President Trump and the rest of these GOP lawmakers wanting to be elected, re-elected or promoted know what they are doing. They know that if the American people realize what they’re doing – they know they could lose 5 Senate Seats and up to 71 House Seats in November. So, they are double downing on their cynical political corruption and lying hoping that American voters will buy into their lies…

Thus exposing the biggest “Achilles Heel;” election vulnerability going into a U.S. election, for a governing party in U.S. history.

The way to win control of both the House and Senate in November for the Democrats is the mantra of “Healthcare, Healthcare, Healthcare”, “The GOP and President are going to pay for their $1.3 a year tax cuts by destroying healthcare for pre-existing conditions in the county.

Vote Democratic if you have or think there’s a chance of your or your loved ones ever getting … Cancer, Diabetes, Blood Clots, Strokes, heart attacks. If you have a baby with a birth defect or complication you’re going to be in for a heartbreak as you learn it’s too expensive to treat your child.

If you vote Republican in November, you’re voting for the premature deaths of millions of your fellow citizens and perhaps the early death for yourself and loved ones.