The pandemic is so out of control in California that Governor Gavin Newsom ordered all counties in the state to close many indoor activities, including dining inside restaurants. The rate of infection, hospitalizations are also soaring in Arizona, Texas, and Florida to the point that no matter what their Republican governors say, they will be forced to shut down their states.

While Trump and his Kakistocracy of minions are busy attacking Dr. Fauci, the world’s leading infectious disease expert, infections appear on an inevitable rise to over 100,000 a day, that Fauci warned would occur. The explosive spike in daily infections hasn’t stopped President Trump from continuing to claim he’s saved millions of lives and has done an amazing job in dealing with the COVID-19 crisis. A stark contrast from the reality we’re seeing unfold.

The spike in coronavirus infections underway has already forced both the Democrat governors of Washington State and California to roll back their state’s re-openings. In contrast, the Republican governors in Florida, Arizona, and Texas twiddle their thumbs hoping for a miracle as their hospital systems have begun to buckle under the explosive demand for care.

Of particular concern is the collapse in testing taking place and the rise of personal protective equipment (PPE) shortages that are starting to become a severe problem. President Trump’s promise of ubiquitous speedy and free testing joins the 20,000 other lies and misrepresentations he has since his inauguration. 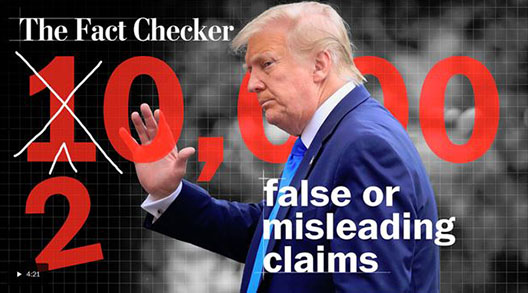 Yesterday, as Wall Street started to recognize the promise of a V-shaped recovery is a bogus as a $3 bill, the Dow Jones went from a 500 point rally to close with just a 10 points gain. At the same time, the S&P collapsed from a 42+ point rally to a 12 point deficit. It was a stunning reversal that may be tipping off the beginning of the retracement to the March 23, 2020 lows.

We have been warning that sooner or later President Trump’s incompetence in leadership would become so compelling the financial markets around the world would recognize that the United States isn’t just heading for a recession but instead inescapably towards a depression even while the Federal Reserve pumped trillions of dollars into the U.S. markets. The Fed has been buying worthless debt, shares in severely crippled companies shares, and index futures fueling a rally back to near pre-pandemic highs. Sooner or later the music will stop, the reality of that these health and financial crisis will last much longer than Trump keeps saying it will. The end of the year scenario painted by Trump and his corrupt administration is a mirage.

The “tell” that illustrates this has been a con job is the way Trump has spun his miracle cures and the way Trump has now begun to demonize Dr. Fauci. He’s so desperate he’s using Chuck Woolery, a former Love Connection host and now a Conservative operative to justify the outrageous lie that it's everyone else that is the problem, but not President Trump. It’s the media’s fault. It’s the CDC’s fault. It’s even the front line doctor’s fault, according to Woolery and Trump. 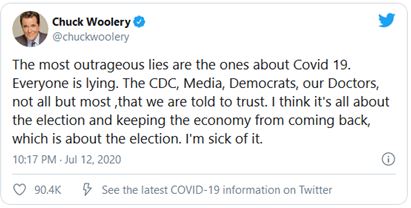 While they chant “Fake News,” over the 65,000 people that were tested positive yesterday. As that reality becomes more apparent and the death toll rises the more transparent, Trump needs a scapegoat.

Trump and his miserable Kakistocracy are intent on blaming 79-year-old Dr. Fauci. It’s disgusting and likely to throw cold water on the Wall Street’s rally. Tying to scapegoat Dr. Fauci comes at the same time this president and his incompetents are trying to force the nation’s children back to school without a plan to protect them. No testing, no money to ensure social distancing, nothing but the argument that children and younger American’s aren’t as susceptible to the virus. Never mind about our country’s teachers and administrators. In their attacking Fauci and pushing for school openings, Trump and his incompetents have thrown the equivalent of cold water on those Americans lulled by his repeated promises of a miracle cure or vanishing of the virus. When you’re talking to parents and grandparents about the health and safety of their children and grandchildren, they pay much closer attention and aren’t nearly as trusting. These are the people who, when polled, show 67% trust Fauci and 26% trust Trump on the handling of this pandemic.

Trump’s attempt to smear Dr. Fauci is going to cost lives. For a sociopath that allows Russia to place bounties on the heads of American soldiers, flouts the rule of law every day, this shouldn’t surprise anyone. The cold water of Trump’s suicide cult approach to the new school year that endangers the lives of our nation’s children may be the cold, deadly siren that finally wakes up Wall Street from the delusion that everything will back to normal by the end of the year. They want to be king in the White House is mad as a hatter. His insanity will destroy his Presidency and guarantees our country is heading into an economic depression. Instead of Dow 30,000, we should be thinking Dow 15,000, S&P 1,500, and $5,000 gold.