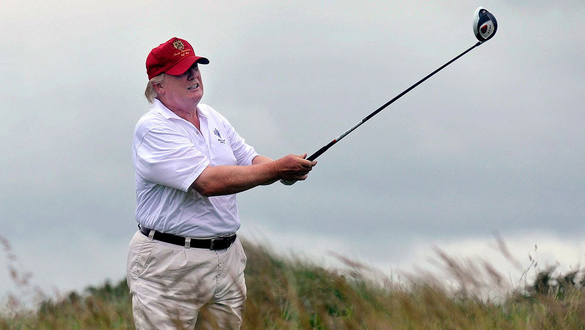 Trump changes his “Law and Order” priority requiring he stay in Washington for a rare day of work to a day in the life of the “executive downtime president’ playing golf. As Americans and the world wait for a profound and resolute response to the growing coronavirus cases plaguing the U.S. the most powerful man in the world take the day off to play golf.

President Trump is doing everything to slander and demonizes the “Black Lives Matter” and the antifascist movement. Trump is taking the political stance as the ‘Law and Order’ candidate and using it as a rallying cry to again lie his way into the hearts of his 35% adoring public. Mr. President’ Law and Order’ serves all of your American citizens. It is not a fictitious rallying cry like “Build the Wall,” or “Lock Her Up.” Incidentally, Mr. President, they have yet to pay for the wall.

The only reason you are now hell bent on the term ‘Law and Order’ is because you are a political opportunist. This stance is entirely due to the protests of a major segment of our population speaking out in protest against many bad apples in the police community. Black Lives Matter was created because the U.S. needs radical and extreme social reform.  Your black fellow American citizens are asking you to do something profound. The answer is not to recycle the “Law and Order’ political  slogan.   What shall we do... Let’s go play golf.

Generals tapped by Trump specifically for their loyalty to him should be busted down to private. The former Lt. Col. Vindman brothers should both be promoted to Brigadier General, decorated with the President Medal of Freedom, and be put back on their career tracks.

Career prosecutors drove out or who became whistleblowers because of the corruption of the Justice Department should be rewarded. Those who blew the whistle should be awarded the President Medal of Freedom as well.

Every inspector general, every U.S. Attorney and every dirt bag appointed by Trump should be fired by the end of the first day of the Biden administration.

Yesterday, our nation saw 47,341 new COVID-19 cases. We’re heading towards over 250,000 fatalities from the pandemic by Election Day 2020. The dereliction of duty by a President and Vice President has never been matched in U.S. history. Their romanticizing of the traitors of the Confederacy, their endangering Americans with their non-mask bravado, and abuse of immigrant children mandate their indictment and trial for treason and crimes against humanity.

“I was going to go to Bedminster, New Jersey, this weekend, but wanted to stay in Washington, D.C., to make sure LAW & ORDER is enforced. The arsonists, anarchists, looters, and agitators have been largely stopped … I am doing what is necessary to keep our communities safe — and these people will be brought to justice!”

… CBS News White House Correspondent Mark Knoller tweeted, the president headed out to the links on Saturday at his golf course in Virginia where the weather appeared to be more conducive for a round of golf….

“President Trump now at his Sterling, VA golf club where it’s partly cloudy, and 80 to 92 degrees. He canceled his weekend at his N.J. golf club where rain was in the forecast.”

So, he lied again. The cancellation of his New Jersey trip for ‘Law and Order’ to play golf in New Jersey was entirely related to weather.

Mark Knoller points out; this is the president’s 80th time at his Virginia club alone. Who says history doesn’t repeat itself. America burns while Nero (Trump) plays golf.