Trump's Brags He Threatened Russia and China with Nuclear War 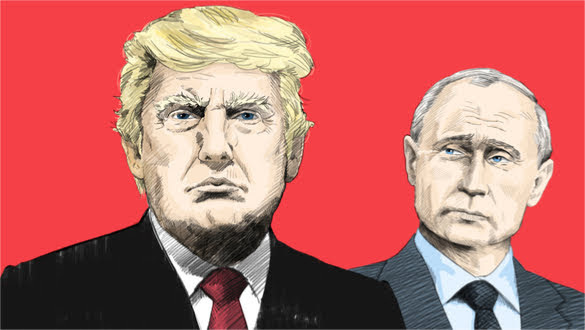 Business Insider just released a video of a Trump phone call to a PGA golfer, in which he brags he threatened Putin with nuking Moscow. Then the former twice impeached one-term president makes the same claim about threatening China's President Xi with nuclear war.

During a recent phone call with professional golfer John Daly caught on video, former President Trump brags about threatening both the President of Russia and China with nuclear war.

He then goes on to say…

"Taiwan will be next. You won't have any computer chips. They'll blow them off the face of the Earth."

During the phone call, Trump asserts about Putin…

"They're all saying, 'Oh, he's a nuclear power,'" Trump said of Putin on the call, which Daly put on speakerphone at the Hoag Classic tournament in California. "It's like they're afraid of him."

"a bystander filmed Daly, who took the call while enjoying food and drinks inside the Newport Beach Country Club."

"You know, he was a friend of mine," Trump continued. "I got along great with him. I say, 'Vladimir, we're hitting Moscow if you do it. I said, 'We're gonna hit Moscow.'"

While Trump and Daly were discussing the ongoing Russian invasion of Ukraine, it's unclear if Trump was alluding to his conversation with Putin while in office or if he thinks he can still launch a nuclear strike?

"I said, 'we're gonna hit Moscow, and he sort of believed me, like five percent, 10 percent. That's all you need."

This suggests that the United States could get away with threatening to vaporize Moscow to prevent Putin from invading Ukraine during his term as President from 2017-2021.

On the other hand, John Bolton, Trump's former national security advisor, said this past Friday that…

"Putin was waiting to invade until Trump's second term because he believed Trump would withdraw the US from NATO."

Every credible expert of Russia's military policy and sane human being for that matter understands nuking Moscow would ignite a retaliatory strike by Russia, and nuclear war that could kill 7 billion people - and all life on Earth, amounts to insanity.

Trump's post-presidency office did not return Business Insider's request for comment before the publication released its article and featured the video posted on Instagram by the person who filmed the phone call.

During this call, Trump also repeated his claim that Putin didn't invade Ukraine while he was President because….

"He never did it during my time, John, you know,"

Daly is caught responding by telling Trump, referring to the Chinese President.

"It's funny how Xi didn't bother you either,"

"No, Xi didn't bother me," "I told him the same thing. That'll be next. That's going to be next. Taiwan will be next. You won't have any computer chips. They'll blow them off the face of the Earth."