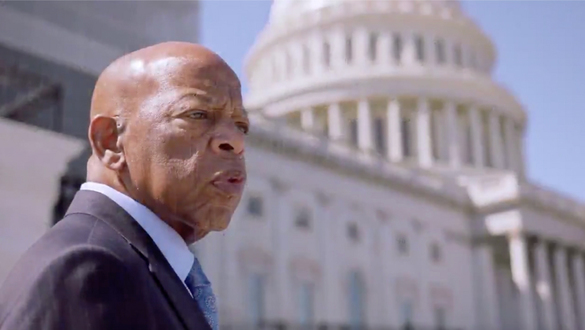 President Trump and his campaign have repeated the mantra that he will win a significant portion of the African American vote in 2020. Yet, most polls are putting his support in this constituency at less than 8%. Trump’s snubbing John Lewis’s death without a mention of his patriotism shows him for the racist and little man that he is.

John Lewis wasn’t just a cornerstone of the civil rights movement; he was the cornerstone of American greatness. Beaten, bloodied, harassed, repeatedly arrested for civil disobedience, targeted by white nationalists, KKK, and FBI, John Lewis never wavered in his love of country and its people. Statues of him should be erected; schools, hospitals, police stations, parks, fire stations, town halls, courthouses, and post offices across the country should be named for him.

The Edmund Pettus Bridge that carries U.S. Route 80 Business across the Alabama River in Selma, Alabama built-in 1940, named after Edmund Winston Pettus, a former Confederate brigadier general, U.S. senator, and grand dragon of the Ku Klux Klan should be renamed The John Lewis Freedom Bridge at the earliest opportunity.

John Lewis was an American hero. When he saw wrong, he spoke out and tried to right it and was too often bloodied for doing so. The greatness of this man, a genuine civil rights icon, is ironically enhanced by President Trump’s apparent disdain. Waiting hours before giving any statement, the President finally did in the early afternoon and could only muster a two-sentence tweet offering prayers to “he [sic] and his family.”

His hatred and contempt for John Lewis and the rights of people of color in the United States, according to White House reporter Jeremy Diamond is because Trump resented the congressman ever since he skipped Trump’s inauguration.

Diamond, however, is off by decades in attributing Trump’s hatred of John Lewis to his boycotting the President’s inauguration. We now know from the President’s niece, Mary Trump Ph.D., a licensed Clinical Psychologist that Trump hated John Lewis and millions of other Americans simply because he and they are black. Any other reason speculated, inferred, or offered is simply gilding the Trump’s deep and fundamental racism.

“President Trump notably feuded with Congressman Lewis before he was inaugurated as President in January of 2017… and it appears that President Trump still isn’t able to get past that.”

Diamond added that it is telling that Vice President Mike Pence quickly released a statement, calling him a “giant of the civil rights movement whose selflessness and conviction rendered our nation into a perfect union.”

This is the kind of statement that could end Pence’s political career. Contradicting Trump could result in the Vice President’s replacement on the 2020 GOP ticket, with former UN ambassador Nicky Haley. Perhaps the only thing Trump could do to save his closeted best friend and frequent customer of Washington’s homosexual prostitute community of Washington D.C.