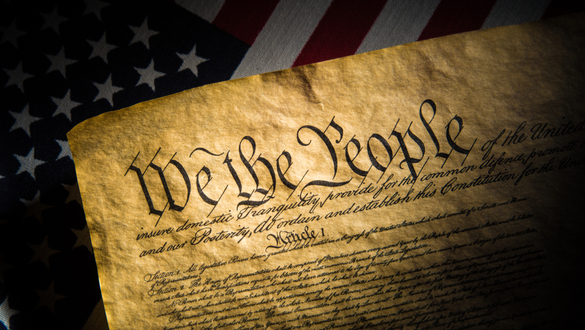 It’s well established by everyone he knows that President Trump doesn’t read. Everything he knows comes from far-right TV, Radio and the Internet. As a result at every turn, POTUS tries to make up the rules as he goes along and intentionally ignores the law.

President Donald Trump said today that intends to go to the U.S. Supreme Court to have them intervene if Congress impeaches him – showing he has no beyond and doubt he has an understanding of the impeachment process. Bottom line, there are no legal grounds for the justices to consider such a request...

“If the partisan Dems ever tried to Impeach, I would first head to the U.S. Supreme Court.”

"There no ‘High Crimes and Misdemeanors,’ there are no Crimes by me at all."

The Constitution empowers the U.S. House Representatives with enormously wide latitude to impeach a president, secretary of the treasury, anyone in his cabinet and even one or all of the Supreme Court Justices.

A 1993 Supreme Court decision specifically decided that courts have no role to play in the impeachment process beyond its Chief Justice presiding over a Senate trial.

“If the President does something dastardly, the impeachment process is available. No single prosecutor, judge, or jury should be able to accomplish what the Constitution assigns to the Congress.”

Trump’s ignorance of the law is nothing new.  According to the Mueller Report, he had no comprehension of the job of White House Counselor. When told that his conversations with Don Mcgahn were not attorney-client privileged and he in no way represented, sources in the White House described Trump as flabbergasted.

His lawsuit to prevent one of his accounting firms from turning over his tax records is futile, again an example of Trump’s lack of understanding, his relationship with the firm doesn’t provide and privilege.

Meanwhile, New York State, Manhattan DA, SDNY, and other state jurisdictions are moving ahead with their investigations in to his businesses, foundations, tax, and insurance fraud, Trump will be unable to prevent Congress or law enforcement agencies from getting his banking records from others holding relevant documents that could prove him and his businesses are outright crooks. The most significant danger according to some political and legal analysts may come from Deutsche Bank.

Meanwhile, the S&P hits a new high, the economy is humming, and his approval numbers are plummeting, hitting their lowest levels in crucial polls since his racist Charlottesville debacle.