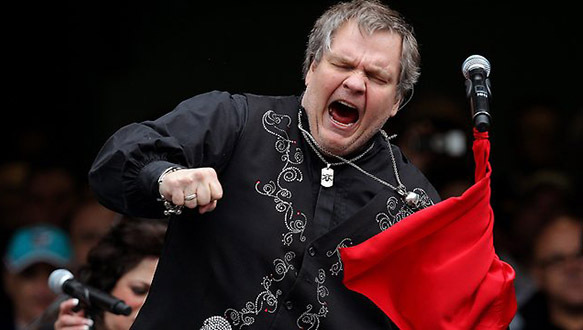 One of Rock and Roll's most talented singers, Meat Loaf, died at the age of 74 from Covid. A few days later, Sarah Palin, the former governor of Alaska and Republican Party's 2007 vice presidential nominee, announced she had come down with Covid.

Meat Loaf and Sara Palin had one thing in common: stubbornly anti-vaccine, anti-mandate, and anti-mask.

Born Marvin Lee Aday in Dallas, Texas, in 1947, Meat Loaf began acting and singing in school productions. He moved to Los Angeles after his mother's death in 1965. His 1977 "Bat out of Hell" album sold 100 million copies.

He took part in many concerts, movies, and TV shows, including former president Donald J. Trump NBC TV show The Apprentice. He and the former president became friendly when Trump ran for president in 2016. In 2020 for re-election, Meat Loaf was a vocal supporter and helped by making campaign appearances and performing at fundraisers.

In an interview with The Pittsburgh Post-Gazette last August, Meat Loaf expressed his skepticism about masks and taking the Covid vaccine. He was quoted as saying masks are a "useless" and a "nuisance" that only "make your nose itch and make it so you can't breathe." He complained about being asked to wear a mask on a plane and said, "If I die, I die, but I'm not going to be to be controlled."

Meat Loaf was reported "seriously ill" with COVID-19 days before death. His family members have confirmed that they have come down with the illness that has taken the lives of 867,868 Americans, with 25,462 currently hospitalized in serious condition from the viral disease.

His most famous song, I'll Do Anything For Love from his Bat Out of Hell II Album, was played at a vast Washington anti-vaccine, anti-mandate, and anti-mask rally this past weekend in tribute to the legendary singer.

I'd Do Anything For Love (But I Won't Do That)

In a few days, Sarah Palin, another enthusiastic supporter of former President Trump, announced that she allegedly dined there indoors while unvaccinated two days after eating in a New York restaurant.

Palin, 57, is in New York City for her defamation trial against the New York Times, which has now been delayed after she tested positive for COVID-19 on Monday morning. Reuters quoted US District Judge Jed Rakoff, presiding over the trial, saying…

"She is, of course, unvaccinated."

The landmark trial has now been postponed to begin on February 3, assuming she doesn't become seriously ill or pass away.

The current national vaccination rate, according to the CDC, is 63.4% leaving tens of millions of American's of voting age unvaccinated. Most of those are registered Republicans or lean towards voting for Republicans.

At the current rate of Covid deaths, another 150,000 Americans will succumb to Covid, pushing the number of deaths over one million by this coming spring. The vast majority of these additional deaths will be people like Meatloaf and the hundreds of thousands of Republican voters who are stubbornly anti-vaccine, anti-mandate, and anti-mask.

Even if the number of deaths falls from this coming spring through November 8, 2022, falls from an average of 2,000 to just 500 a day from Covid, Republicans could end up losing another 60,000 voters. All one has to do is recognize that the number of family members of the anti-vaccine, anti-mandate, and anti-mask millions who survive those that pass away who balk at voting or vote democratic is a multiple of those who have died of Covid to realize that November could stand out as being a historic hiccup in which the party of the president gain seats in Congress instead of losing them.