We have said it over and over again when Manhattan District Attorney Cyrus Vance Jr. gets his hands on President Trump’s tax returns he will be indicted on a raft of state crimes in New York and will be convicted. It’s now just a matter of time.

Pulitzer Prize-winning Trump biographer David Cay Johnston a tax expert and bestselling author was the first to alert the world to the tax corruption and money laundering Donald J. Trump and his three oldest children. Johnston worked his way up through the Trump Organization and their personal finances. Instead of being prosecuted for these crimes in Federal Court, The Trumps' now face the certainty of facing indictment, trial, and prison sentences in New York State.

Keep in mind; the three oldest Trumps’ have been caught committing fraud with the Trump “charity” and are banned for life from participating in any charity beyond donating.

The only person that can stop the bankrupting of the Trump Organization and incarceration of the president, members of his family, and sycophants that took part in the crimes committed in New York State is Governor Andrew Cuomo, who will never grand pardons. Gov. Cuomo is big on the concept that no one is above the law.

This morning, David Cay Johnston predicted the Supreme Court’s decision to release President Donald Trump’s tax returns would lead to an indictment from New York prosecutors.  This confirms what we have been telling our readers will happen now for over three years. 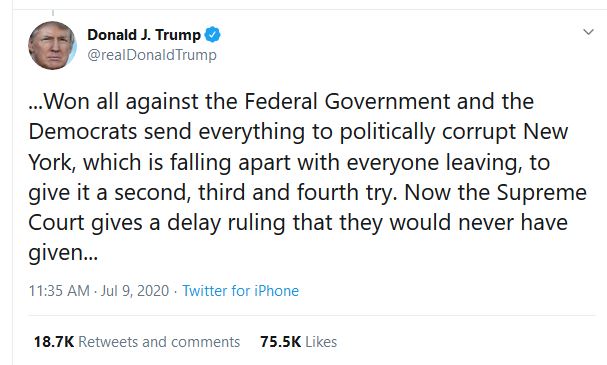 Responding to CNBC host Joy Reid: “What do you think might be out there?” Johnston answered…

“Well, Donald Trump has already had two income tax fraud trials by the state of New York and the city of New York. They were civil fraud, not criminal fraud. The New York Times in October of 2018, in this brilliant project on Trump’s taxes based on records we know came from his niece — without question, he and his siblings are major-league tax cheats.”

“What the district attorney is seeking is the business records, the accounting records, the banking records to 2011. If those deviate from what Donald trump put on the tax returns, I expect they’ll indict Donald Trump for criminal tax fraud. How quickly it comes depends on how successful Trump’s lawyers are in delaying and using the procedure and interlocutory appeals if they don’t like the federal judge overseeing the case — his rulings.”

CNBC host Joy Reid the pointed out that…

“Even if the Biden — let’s say Biden wins and he has an administration and he’s averse to the idea of prosecuting a former president. It doesn’t have anything to do with Vance.”

Biden, however, has made a pledge to his supporters and the country he will not pardon President Trump or any of those in his administration who have committed federal crimes.

Johnston pointed out that even if Donald Trump dares to resign as president, to swear in Vice President Pence to pardon [him],” said Johnston…