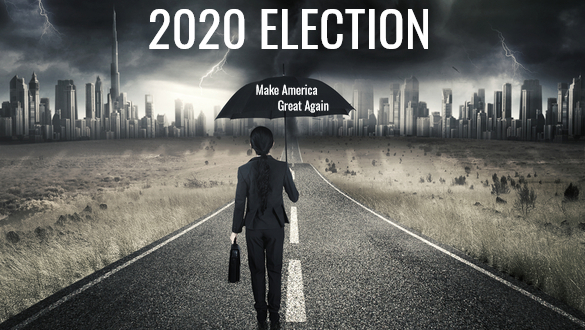 Fear of his reckless global trade war, especially against China and his increasing the federal deficit by a trillion dollars a year with tax cuts for the ultra-rich, has President Trump in a panic.

President Trump is literally going into a mad panic. He’s desperate to head off a recession until after the 2020 election. Monday he proved his former White House Communications Director right Anthony Scaramucci who predicted that President Trump would turn on everyone including the American people eventually.

Trump true to the firm has been attacking his appointees Jay Powell Chairman, and Richard H. Clarida, Vice Chairman of the Board of Governors of the Federal Reserve Vice Chairman in recent weeks in a series of tweets in an attempt to bully them into lowering interest rates.

On Monday, he expanded his bullying demands to include restarting quantitative easing – turning on the printing presses. Reducing the Federal Reserve interest rate target and resuming quantitative easing will send the dollar into a tailspin, nose-dive or even worse plunge the United States and the rest of the world into a rapid-fire currency war that would be disastrous for the world economy. 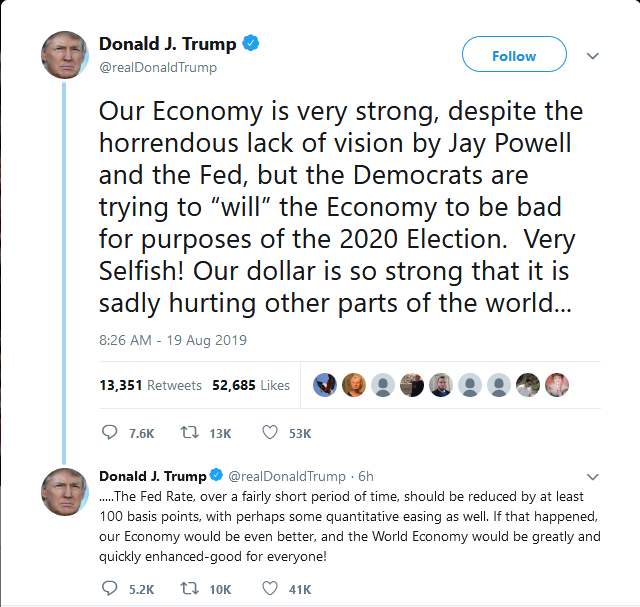 “The Fed Rate, over a fairly short period of time, should be reduced by at least 100 basis points, with perhaps some quantitative easing as well,” Trump wrote in a tweet. “If that happened, our Economy would be even better, and the World Economy would be greatly and quickly enhanced-good for everyone!”

Trump has been described his advisors Kelly Anne Conway’s husband as ‘deranged,’ others have accused the president of suffering from Dementia. The first part of his series of tweets this past Monday seems to back up both assessments.

Trump’s insistence the economy is “very strong despite the horrendous lack of vision by Jay Powell and the Fed” ignores the fact that the $1 Trillion tax cut for America’s richest and corporations have not paid for themselves as he and his sycophantic GOP Congress guaranteed it’s would.

Trump’s pointing the finger at the Jay Powell and the Fed is just as insane because it ignores his bellicose brag that “trade wars are easy to win.” Trump’s trade wars with China and many of our allies have gone on for more than a year, and they are proving anything but easy to win.

The Federal Reserve has taken not of what appears to be an ever-growing global slowdown that has been triggered by President Trumps “easy to win trade war” and has lowered its benchmark interest rate last month by a quarter-point, to a range of 2% - 2.25% – the first rate cut in more than a decade.

Trump is obsessed with the increasing likelihood of a recession occurring in 2020 just as the general election. He’ll do anything to keep that from happening except capitulate on his tax cuts to the rich and a lot less than he’s demanding from China, Japan, South Korea, and the European Union in trade concessions.

Trump’s lack of grip on reality manifests itself in all most all of his tweets and claims. His claim of the lowest unemployment rate in decades is true, but it’s also true that President Obama created over 800,000 more jobs than Trump in the same period during his first term. While Trump has enjoyed the stock market being up 29% over his two years in office, Obama saw a 49% gain by comparison.

Trump’s attacks on at the central bank’s chairman, Jerome Powell, intensified after the central bank lowered its benchmark interest rate last month by a quarter-point, to a range of 2% to 2.25%. If he bullies Powell and the rest of the board of governors into turning the printing presses, the global economic recession will turn into a global economic crisis.