Trump Tweets, “Getting VERY close to a BIG DEAL with China. They want it, and so do we!” 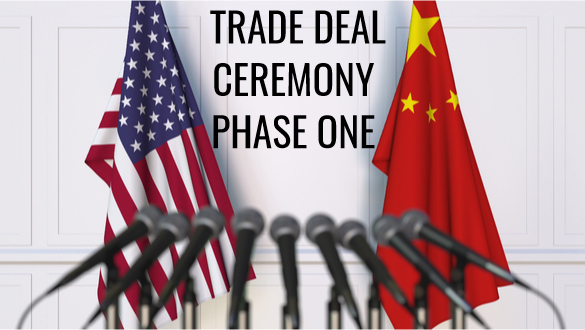 Trump hoping the “Phase One” trade deal with China will help bolster his re-election chances. His tweet sends the S&P and other indexes to new historic highs.

Even though Congress is on the verge of impeaching President Trump, his assurance of a trade deal via a text early today that a trade deal with China approaches.

Trump’s claim of an approaching deal with China comes after unnamed sources familiar with negotiations told the international media that the Trump Administration that a “phase one” deal is getting very close to being done.

The United States has reportedly agreed in part of the “Phase One Deal” to drop the threat of implementing the U.S. threatened additional tariffs on about $156 billion worth of Chinese imports. In addition,  the U.S. will cut the existing tariffs by 50%. Also, this first incremental deal should take the pressure of a deadline in negotiating a larger deal before next year’s U.S. general election.

Negotiators from both sides have remained in constant contact, according to a Bloomberg report citing the Chinese Ministry of Commerce spokesperson Gao Feng.

Despite the optimism that December 15 tariff deadline will be either short-circuited by a new deal or will be delayed to allow the deal to be finalized. There’s always the risk of a last-minute “Lucy pulling away from the ball from Charlie Brown,’ and the threatened tariffs will go in effect. However, observers believe this time, a deal will be made.

We have made specific recommendations on Chinese stocks that we believe will jump 30%-35% if a “Phase One Deal” is reached in our monthly investment newsletter World Opportunity Investor.