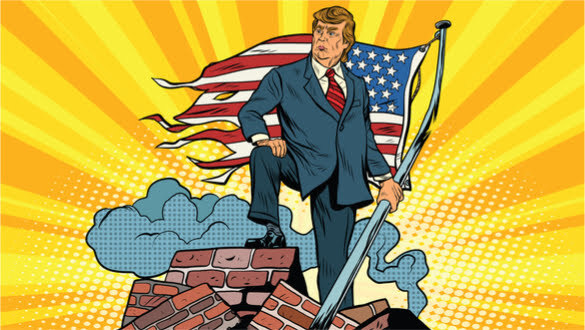 As a private citizen, Trump may cause even more political, social, and economic turmoil to the United States infrastructure than as president.

It's bad enough some medical experts believe the new Delta variant of Covid-19 that now represents 85% of the 60,000 infections being recorded every day may lead to as many as 4,000 deaths a day by this coming October.  If this becomes a reality and we see the numbers of infected and dying climb in August and September, we will see the U.S. Stock Market take a precipitous nose-dive of 15%, 20%, even 25%.

Keep in mind while the United States has a total vaccination rate of 49.1%, around the world, the rate of vaccination is a fraction of that.  So if the United States by October has 4,000 people dying a day, imagine the number of those who will die a day in Asia, Africa, Europe, South, and Central America. The pandemic of the unvaccinated could kill another 4.1 million people worldwide and another 625,000 here in the United States before the end of 2021. This assumes, of course, that an even more infectious deadly Covid-19 variant doesn't emerge.

The economic recovery here in the United States and worldwide would be stalled by the third wave of this insidious virus.

On top of this, we have to worry that former president Trump will kill the bipartisan $1.2 infrastructure deal with a simple statement.

Trump issued a statement yesterday that Senate Minority Leader Mitch McConnell and his group of "RINOS" (Republicans in name only) want to complete the (infrastructure) deal done "at any cost" to show they can work with the "Radical Left Democrats."

Trump then said Republicans should not work on the deal until they "regain a strong negotiating stance" after the 2022 elections.

For those who remember all the promises made by Trump for five years about infrastructure and all the infrastructure weeks that amount to a big fat zero while he was in the White House, his decree to Republicans amounts to economic insanity.

Yet, Trump has likely killed the bipartisan deal, and once Wall Street figures out that any infrastructure deal passed by the House and Senate will have to take place during budget reconciliation. Thus creating an all-Democrat bill may well exceed $5.5 Trillion as all compromises with the absentee Republicans are thrown aside.

This failure to reach a bipartisan deal due to Trump blowing up the negotiations could be compounded by the rapid spread of this insidious Covid-19 Delta variant.

Our country could very well have to fund another $1 trillion to $3 trillion on top of the $5.5 trillion infrastructure bill to contend with the third wave of Covid-19.

The new Delta variant of Covid-19 and the open war that will erupt in Washington between Republicans and Democrats will backfire on Trump. Instead of regaining "a strong negotiating stance after the 2022 elections," the Republicans could lose as many as 15 seats in the House and four seats in the Senate. Keep in mind that Trump may have 90% of what's left of Republicans in his pocket, but he and the GOP cannot count on much of a cross-over from Democrat and Independent voters.

Trump and the GOP are about to deal with a string of criminal indictments that will further tarnish the disgraced president, his family business, and a number of close associates. Then there's his unwillingness to tell Americans that wearing a mask is necessary. The testimony of people like the Chairman of the Joint Chiefs of Staff General Mark A. Milley that will take place before the House Select Committee on the January 6, 2021 insurrection will burn him to the ground with the help of Republican house members Liz Cheney (R-WY) and Adam Kinzinger (R-IL).

Schumer Responds To Trump, Fox Not To Work On Infrastructure