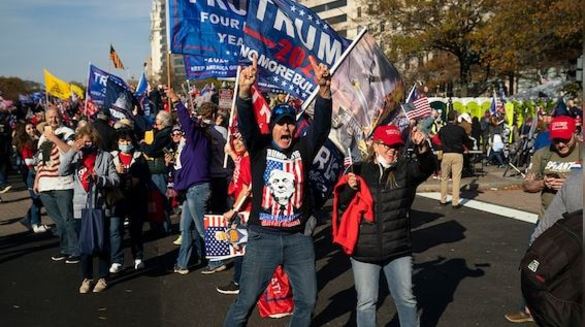 In the early evening, President Donald J. Trump lost all semblance of reality and demonstrated that those accused of being a want-to-be dictator were proven correct. Trump literally threatened the lives of any Congress member to defy his wishes and ceremonially vote to affirm President-election Joe Biden as our 46th president of the United States.

President Trump’s Tweet will make it impossible for him to evade his many crimes. With the U.S. Senate this morning back in control of the Democrats, President-elect Biden will be able to get the Attorney General of his choice confirmed.

Senator Lyndsey Graham’s threat to not approve the nomination of an Attorney General who wasn’t willing to commit to investigating or charging President Trump, his family members, etc., is now an empty threat. In fact, Lyndsey Graham and many other Trump sycophants like Congressman Devin Nunes (R-CA) that was up to his neck in obstruction of justice during the Mueller investigation -- should be very worried.

Washington prepares for thousands of Trump supporters expected to gather Wednesday in the nation’s capital to hear a defeated president and his allies amplify false election fraud claims during a rally steps from the White House.  This insanity is being orchestrated by our law and order president.

The New York Times asked why they were at the rally in helmets and body armor, a man who appeared to be leading the Three Percenters said, “You know why we’re wearing helmets.” He refused to give his name, angrily dismissing the news media as “traitors” who “gave up on this country.”

A grand bandstand was erected, huge speakers were attached to tall scaffolding. Thousands of chairs were unfolded on muddy grass ahead of rallies to proclaim victory for a president who lost soundly in November.

Meanwhile, expect our president to pardon himself and every person that was involved in the 2016 Russian election interference and cover-up, including a self-pardon. It’s going to an ugly in the final 14 days leading up to inauguration day. Meanwhile, Trump continues to ignore that one American dies from Covid-19 every 33 seconds, and country’s medical system is in danger of collapsing. Instead, he’s focused on figuring out how to stay out of jail in New York and now Georgia.

‘This Is A Defeat For Donald Trump,’ Chuck Todd