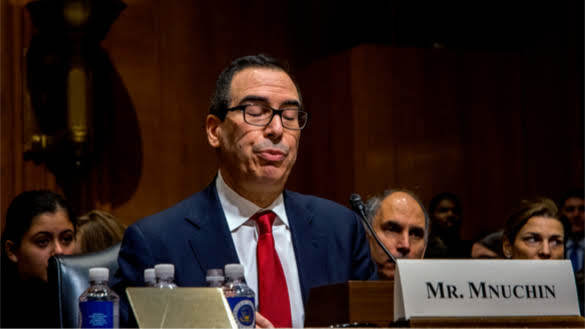 David Cay Johnston is a world-renowned journalist who won the 2001 Pulitzer Prize for his coverage of the American tax system in The New York Times. He is the author of bestselling books on taxes and Trump. He’s warning Treasury Secretary Steve Mnuchin and Charles Rettig, the IRS commissioner that they could be removed from office by Congress and the Courts for refusing to turn over President Trump’s tax returns to Representative Richard Neal, the Massachusetts Democrat who chairs the House Ways and Means Committee.

Just two days ago on Capitol Hill, Treasury Secretary Steven Mnuchin was feeling feisty and argumentative when confronted with a barrage of questions related to President Donald Trump's tax returns and whether his department would comply with a congressional request for the documents. Mnuchin was so feisty during the hearing he threatened the Financial Services Committee Chairwoman Maxine Waters that he would never voluntarily appear before members of Congress again.

During his testimony, Steven Mnuchin confirmed that there had been discussions regarding Trump’s tax returns between the Treasury Department's legal team and White House officials. Mnuchin’s confirmation that this communication did take place with the White House may have confirmed a coordinated effort to violate laws.  The questionable contact could lead to a shockingly quick series of events with all involved including Mnuchin, IRS Commissioner Chuch Rettig and anyone involved in discussions that lead to the Treasury Departments refusal to immediately release of the six years’ worth of Trump's tax returns.  House Ways and Means Committee Chairman Richard Neal, D-Mass had authorized this request.

"Our legal department has had conversations prior to receiving the letter with the White House general counsel. I acknowledge that there were conversations. I am not briefed on the Mnuchin added that the conversations were "informational" and he was not part of them yet that will make little difference since he is the head of the Treasury and is also responsible for the non-delivery.

Today, in a Daily Beast David Cay Johnston revealed the violation of the 1924 anti-corruption law that makes refusing to turn over Trump’s tax returns could face being removed from office and sent to prison for five years just for doing Trump’s bidding in refusing to turn the tax returns over to House Ways and Means Committee Chairman Richard. According to Johnston…

“The reason will no doubt surprise those who think Trump can thumb his nose at the law governing congressional access to anyone’s tax returns, including his. It will for sure shock Trump, who claims that "the law is 100 percent on my side."

The exact opposite is true, according to Johnston…

“Under Section 6103 of our tax code, Treasury officials “shall” turn over the tax returns “upon written request” of the chair of either congressional tax committee or the federal employee who runs Congress's Joint Committee on Taxation. No request has ever been refused, a host of former congressional tax aides tell me.”

“The crystal-clear language of this law applies to Trump, acting White House Chief of Staff Mick Mulvaney, Mnuchin and Rettig, federal employees all.

“The law says all of them "shall" be removed from office if they fail to comply with the request from Representative Richard Neal, the Massachusetts Democrat who chairs the House Ways and Means Committee.”

“There are no qualifiers in Section 6103 that shield Trump from delivering, in confidence, his tax returns to Congress. No wiggle room at all.”

Johnston goes on in today’s op-ed citing another provision in our tax code, Section 7214(a), which provides that

“Any officer or employee of the United States acting in connection with any revenue law of the United States… who with intent to defeat the application of any provision of this title fails to perform any of the duties of his office or employment… shall be dismissed from office or discharged from employment and, upon conviction thereof, shall be fined not more than $10,000, or imprisoned not more than five years or both.”

According to Johnston, all that is needed to set this in motion is for Committee Chairman Neal is to make a request in writing that falls within the committee’s tax law and IRS oversight duties. Neal’s carefully articulated reasoning and requests for specific tax returns and related tax information in his April 3 letter easily meet that standard.

Keep in mind Congress applied this law to Richard Nixon, who resigned in disgrace after a second audit of his returns showed he was a major league tax cheat. Nixon fabricated deductions worth more than $3.4 million in today’s money. Nixon, however, got off with a pardon, while his tax lawyer went to prison.

Mnuchin or Rettig or anyone else who might escape prosecution for failing to provide the requested tax returns, removal from office under 7214(a) would damage and perhaps destroy their opportunities to cash in once they leave office.

“Mnuchin, a former Goldman Sachs partner and savings and loan company chief executive, is only 56. Removal from office alone could mean an end to his big paydays in finance under existing regulations.”

“Rettig, 61, a tax lawyer whose specialty was helping wealthy tax dodgers who got caught in audits, could lose his California law license, especially were he to be convicted.”

“The good-conduct provisions of the tax law are as broad as they are severe.  Significantly, it doesn’t just affect IRS auditors and collections officers. It applies to any federal employee—which means Trump as well as Mnuchin and Rettig—who “fails to perform any of the duties” they are assigned.”

“This provision could hit Mulvaney, the acting White House chief of staff and Trump’s budget director, given his reckless statements on Fox News, which some call Trump TV.”

“Should congressional tax lawyers, after examining Trump’s tax returns, find that he is a tax cheat, anyone with knowledge of the cheating would also be at risk of prosecution.”

“Trump has a bad record with the tax courts… he has lost two income tax fraud civil trials over his 1984 New York state and city tax returns, as recounted in my 2016 book The Making of Donald Trump.”

“He is also a confessed sales tax cheat, prompting Mayor Ed Koch of New York to say that Trump should have served 15 days behind bars for his crimes. The law covers official inaction, too. Anyone who “omits” his duty “shall” be removed and may be prosecuted as a felon.”

“The risks to Mnuchin’s liberty and fortune help explain why Mnuchin, while not turning over tax returns by the Wednesday deadline, told Congress this week, “as I've said in the past when we received the request, our legal department would review it, and it is our intent to follow the law.”

Mnuchin can’t stall for long according to Johnston…

“If he or Rettig tries endless inaction, forcing House Democrats to sue in federal court, the failure to act could result in the same painful results as outright refusal to comply.”

“Under what is known as a “delegation order,” the responsibility for giving Congress tax returns upon written request has long been the duty of the IRS commissioner.”

In testimony before the House Ways and Means Committee on Tuesday, Rettig said the decision on turning over the tax returns was his. He said he is “working on” a letter about what he will do. He also noted that he reports to Mnuchin since the IRS is under the umbrella of the Treasury Department.

One big problem for Rettig and Mnuchin and perhaps others is the provision requiring removal from office for anyone who “conspires or colludes with any other person.”

Mnuchin’s acknowledgment that Treasury officials spoke with White House officials, while Rettig indicated he has spoken with Mnuchin and others at Treasury puts them all in line to lose their jobs and to face up to 5 years in prison.

All of this leads to the question everyone wants to know which is… what’s so bad that POTUS is willing to risk anything to keep his taxes from examination?