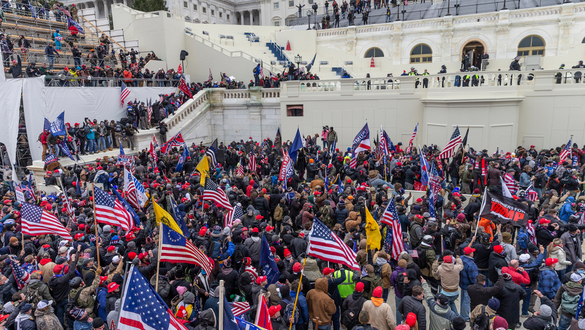 The Palm Beach Post reported, Willie Guardiola, a well-known Palm Beach County Florida supporter of President Trump, warned that “very drastic” efforts are in the works to keep Trump in power.  And prevent President-elect Joe Biden from being sworn in next week.

“Something very drastic is going to happen in the next nine days and everybody needs to be ready.”

“I’m on standby. I was hoping and planning on going to Trump’s second inauguration. I can almost tell you 100% for certain that Joe Biden is not going to be inaugurated on the 20th. And I’m hanging my hat on that.”

The Federal Bureau of Investigation (FBI) is likely not to be patient with Guardiola, who was unwilling to provide details when being interviewed by the Palm Beach Post. The FBI isn’t going to ignore Guardiola’s vague threats, after his attendance of President Trump’s January 6, Washington, D.C., “Save America” rally that turned into an insurrection, especially when Guardiola’s Palm Beach Post interview took place just hours before a leaked FBI bulletin to the press on Monday that warns of a “huge uprising” in advance of Inauguration Day.

Despite the explosive political atmosphere in our country and the danger of confronting the lies spun by a clearly sociopathic and psychotic President Trump and his deluded sycophants, the U.S. House of Representatives, with the backing of Palm Beach County congressional Democrats, joined Monday in presenting a new article of impeachment, perhaps only the first of this second impeachment of Trump, a charge of “inciting insurrection.” The move comes as lawmakers and others have called on Vice President Mike Pence to invoke the 25th Amendment, which would strip Trump of power in his presidency’s final days.

“The FBI received information about an identified armed group intending to travel to Washington, DC on January 16. They have warned that if Congress attempts to remove POTUS via the 25th Amendment, a huge uprising will occur.”

According to ABC, the FBI is instructing local police agencies to increase security at the 50 state houses around the country and confirmed by other news networks.

Mary Trump: He’s going to Texas to make a stand

Accusations of election fraud have been rejected by state elections officials, including Republicans, state and federal courts, and even the U.S. Supreme Court. These rulings from his party membership and the court system have not stopped President Trump and his insurrectionists’ circle from continuing to make these unfounded allegations. This has and continues to whip up Donald Trump’s most diehard supporter’s belief that he was the rightful winner of the general election back in November.

Democrats and a growing but still small number of Republicans across the country and Washington to call on Trump and his congressional supporters to tell the public the truth — that the election was fair, there was no widespread fraud, and Biden is the rightful winner.

However, Trump still refuses to admit the truth and continues to push a false narrative and rile supporters. This unwillingness to tell the truth and willingness to drive a false, corrupt and extremely dangerous narrative has resulted in the president being banned from social media platforms over fear he will continue to incite further violence.

Trump’s video Saturday in which he agreed to a transfer of power to Biden, did not directly concede defeat in the November 3 vote and expressly declared that the election had been stolen.

Trump dropped by key lender Deutsche Bank according to NYT

During a phone call yesterday with President Trump, the House of Representatives Republican Minority Leader Kevin McCarthy finally confronted him with the truth. The president intended to blame the January 6, 2021 insurrection at the United States Capitol building on “Antifa.” Still, McCarthy told Trump that it was a MAGA, and he was there so - he knows the truth first hand.

McCarthy also told the president repeatedly that the election is over in reaction to Trump’s repeated rants about election fraud. Still, regardless of the Congressional Minority leader’s attempts to introduce the president and his supporters to reality, many Republicans continue to stand by the by Trump and are willing to tear the country apart to crown Trump President for life as a dictator.

Nefarious Trumplicans remain solidly behind Trump, refuse to recognize the FBI’s bulletin, and continue making assertions and threats like Guardiola. Yet, key congressional Republicans STILL, even after the January 6th insurrection attempt, that President Trump will not spur another round of violence or upheaval.

An especially egregious example of this willful blindness came from Republican U.S. Sen. Roy Blunt of Missouri said Monday on a national television interview in which he said…

“My personal view is that the president touched a hot stove on Wednesday and is unlikely to tough it again.”

Sen. Blunt and those Republican lawmakers in Washington who follow that opinion should listen to what supporters like Palm Beach’ Guardiola.

Guardiola, who was an organizer of one of five busses that drove from Florida to Washington for the January 6 insurrection, says that he and legions of Trump supporters are ready to stand with the president, whatever that entails, between now and Inauguration Day…

“Something is going to happen here radical” agenda of the left and the “Deep State,” “I don’t care if you are Republican or Democrat, this country does not need to be going to be where it’s heading right now.”

According to Guardiola, some on his bus entered the Capitol after being “beckoned” by welcoming security guards. He said there was almost no law enforcement officer’s insight on the 40-minute walk to the Capitol from where Trump’s rally took place. He said they saw no police in the Capitol when they arrived.

“It ended up phenomenal; it was the best rally that anyone in this country had ever done.”

Senator Blunt and Willie Guardiola continue to fail to recognize the five people, including two police offers who died. The video shows that the “Save America” mob and a riot that will lead to hundreds if not well over a thousand arrests — including many people from Florida.

Guardiola and legions of diehard Trump supporters continue to ignore the video footage that the “rally” lead to the capital’s insurrection. This is best shown by Guardiola telling the Palm Beach Post…

Trump is all alone