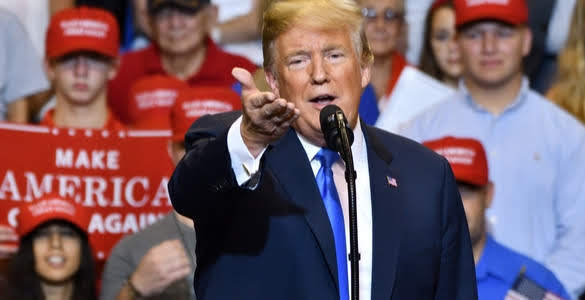 During an interview on MSNBC, conservative campaign strategist Susan Del Percio was shown a clip of Donald Trump's Florida rally Saturday night. Trump talked about the indictments filed against his company, and she explained that the former president incriminates himself almost every time he speaks.

Trump decided Saturday night in Sarasota to rant about how Manhattan DA has politically targeted his company and Chief Financial Officer Allen Weisselberg. He all but admitted that he has been avoiding taxes for 15 years, a central part of the Manhattan DA's investigation of the Trump Organization.  Del Percio insisted that every time the ex-president speaks, he can't seem to keep himself from making the criminal indictments stronger.

"Time will continue to wear away at Donald Trump. These legal problems may also force him to eventually have to stop these rallies because the more he opens up his mouth, the more incriminating --, the more often he incriminates himself."

Del Persio then went on to say…

"For example, last night, it's about fringe benefits. Did you notice he didn't say, 'oh, there are charges against my company are false'? He just didn't like what he was being charged with -- so we'll see."

Ex-President Trump is following the lead of his two oldest sons are playing a dangerous game of Russian roulette, speaking about the criminal indictment of their company and its CFO. Figuratively every word that minimizes the 15 felony charges already charged is like pulling a trigger on a gun aimed at their heads.

Both Eric and Donald Trump Jr. have appeared on TV interviews in the right-wing media. Instead of denying the criminal charges filed by the Manhattan DA, they instead attempted to trivialize the indictments. They continue to make it harder and harder for their defense attorneys' to defend their company, Weisselberg, and potentially several of Trump's executives, including his three oldest children, including Ivanka Trump.

Suppose the Trump Organization and other Trump executives are charged for the same tax evasion, tax fraud, money laundering, insurance, and bank fraud believed by knowledgeable observers of the ongoing investigation, it could result and set the stage for a superseding indictment that claims a pattern of criminality that will allow the former president and all involved in the possible crimes to be indicted for the New York State version of RICO i.e., racketeering.

So while pundits debate whether Trump will run for president in 2024, what they should be focusing on is how many additional superseding indictments will be filed in the next five months the Manhattan Grand Jury convened to investigate Trump's possible crimes.

Trump and his oldest sons are behaving as if the indictments against their company and CFO are all the danger they face. While the threat they face is exponentially more significant and any knowledgeable, experienced defense attorneys would likely recommend to the three of them – shut up.