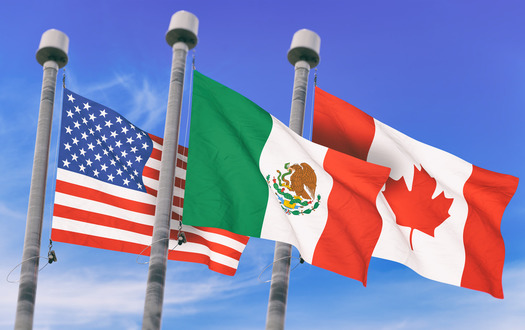 The last time the U.S. and Mexico thought there was a deal, Vice President Pence killed it with additional demands. This deal still needs to be signed, and there are unresolved issues – before it’s prematurely celebrated.

With the growing worldwide trade war continuing in the background, President Trump has just announced – in a hastily arranged Oval Office event with President Enrique Pena Nieto joining him by conference call – the deal he described as being a bi-lateral U.S/Mexico agreement, and that the agreement reached should not be referred to as NAFTA.

However, Mexican President Pena Nieto referred to the deal as being NAFTA and expressed the sentiments that he was “quite hopeful” Canada would soon be incorporated in the revised agreement.

Trump was more guarded about the potential of reaching a deal with Canada, but insisted that he call and speak with Canadian Prime Minister Justin Trudeau “in a little while” and hoped to begin re-launch negotiations with him “almost immediately.”

“Canada’s signature is required …We will only sign a new NAFTA that is good for Canada and good for the middle class” … “we will continue to work toward a modernized NAFTA.”

Today’s joint announcement by U.S. and Mexico comes after a year of threats by President Trump that he was going to quit NAFTA entirely and impose brutal trade sanctions against Mexico and Canada. The three countries trade more than $1 trillion annually; much of it tied directly to the NAFTA agreement.

White House sources are telling the press that the new deal came together as the result of significant breakthroughs that came during the past several days of bilateral talks on automobiles and energy.

Despite the announcement, this morning Mexican Economy Minister Ildefonso Guajardo told reporters he entered the Washington office of the U.S. Trade Representative where negotiations are going on, and there is one major unresolved issue but declined to identify it.

Early this year, the issue that short-circuited negotiations was the sudden demand that any agreement reached be for only five years. The Mexicans and Canadians balked, not wanting to go through another traumatic negotiation so quickly and because it would harm private industry by not setting a long-term playing field for business planning. If this is still a demand by the Trump Administration and is the unresolved issue, this deal could collapse yet again.

Jesus Seade, a principal negotiator of Mexican president-elect Andres Manuel Lopez Obrador, has assured the press and members of the Mexican business community that the two nations will agree on a softened version of a so-called “sunset clause,” the automatic expiration after five years that had turned negotiations upside down.

Other key issues that have to be worked out or any hope to actually get this new trade agreement completed is a resolution of the issues tied to Chapter 19 anti-dumping panels – which the U.S. wants to kill but which may be a deal-breaker for Canada – and Trump’s determination that Canada dismantle its protections of its dairy industry. Something that had been accomplished via the Trans-Pacific Trade Agreement, that Trump walked away from shortly after taking office.