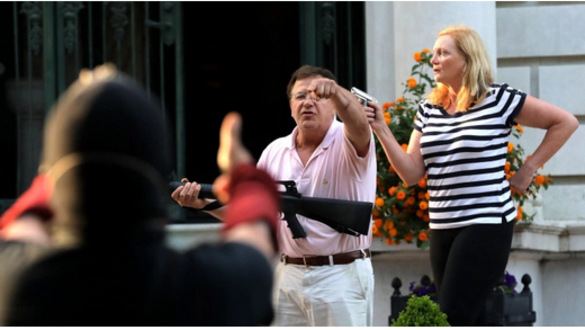 Just days after retweeting a racist video with a white man yelling “white power” and deleting it 3 hours later, Trump Tweets something many times worse. Trump clearly wants to encourage racist vigilantes to kill as many peaceful protestors as possible.

President Donald Trump retweeted a video Monday morning of a white couple in St. Louis showing one brandishing a semi-automatic rifle and the other a handgun at a multi-racial group of peaceful protesters over the weekend. The video is shocking, but the still life photo the president retweeted is a horrifying act of racism for a sitting United States President.

Trump’s retweet is the second time in two days the president has used his social media platforms to incite racial and political divisions as America confronts its racism and police brutality.  Americans are demanding social justice reforms after the killing of George Floyd, while President Trump makes every attempt to stir the racism kettle to the point of boilover.

Trump deleted the video from Twitter approximately three hours after posting it after playing a round of golf, outraging millions of Americans.. The White House, including the president, has yet to condemn the racist sentiment. Still, a number of absurd excuses bordering on impaired chief executive judgment have been floated by the White House Press Secretary.  This has been a common theme by the White House.

The New York Times described the shocking events in St. Louis on Sunday...

A barefoot white man dressed in a pastel pink polo shirt and khakis emerges from his marble mansion and appears to threaten protesters who are marching down a private residential street. A woman, also barefoot, stands next to him in a pair of black capri pants, with her finger on the trigger of a silver handgun she points at the protesters.

“The protesters were participating in a peaceful march to the home of Lyda Krewson, the Democratic mayor of St. Louis, in order to demand her resignation after she released the names and identifying details of individuals who supported defunding the police.”

“The group can be heard banging on drums and yelling to one another, “Keep moving!” as they walk past the couple threatening them with firearms.”

The couple has been identified by The St. Louis Post-Dispatch as Mark T. McCloskey and Patricia N. McCloskey, both personal injury lawyers.

When reached at her home Monday night, Patricia McCloskey declined to address the episode.

The video went viral, and within a few hours, more than 10 million viewed it online.

Trump retweeted a video and article about the scene on Sunday. The White House went into a panic with some saying off the record –it was like a five-alarm fire broke out.

Trump has positioned himself as a staunch defender of Constitutional Second Amendment Rights and probably thinks this picture will garnish his support but the for as many gun rights enthusiasts.   There are many more voters who, when seeing this picture, will be scared that Trump’s Law and Order argument is setting the stage for a mass shooting of peaceful protesters.

Trump has continuously attempted to blur the lines between peaceful protesters, whose right to assemble is protected by the Constitution, and violent looters, and opportunists who, on a minimal basis, have been responsible for vandalism and fires in some communities around the country. It’s also believed that white supremacist groups have caused some of the chaos in the wake of outrage over the killing of Floyd by police in Minneapolis.

“Seattle Looters, Agitators, Anarchists and ‘Protestors' are now refusing to leave the ‘CHOP’ Zone. They have ZERO respect for Government or the Mayor of Seattle or Governor of Washington State! Not good!”

We at WallStreetRebel.com believes Trump is going to incite a mass shooting of peaceful protesters that will be similar to the nightmare shooting in Las Vegas that killed 56 people at an event in front of Mandalay Bay in 2017.

Trump’s continued attempt to win re-election by dividing the country is being soaked up by violent white supremacist groups that are armed with weapons of war and are not afraid to use them. These groups of racial anarchists don’t believe in a multi-racial democracy and, in some cases, overtly call for the systematic slaughter of all people, unlike them in color.

Instead of addressing the 42 million people out of work, the economic damage the country has suffered, a deadly pandemic Trump has been fixated with the second coming of the Confederate States of America rebirth and his golf game.

The nation is on the precipice of a bloody catharsis where a large group of peaceful protesters may slaughter. Some believe Trump would use an event like that to declare martial law and cancel the November 3rd election. If this is his goal, God help us all, for we can lose our Republic.  The one thing that history has taught us over the generations is liberty, and freedom is fragile and must be earned, or it can be lost.  This president does not understand the Constitution of the United States is the hard-fought-for law of the land for all citizens and does not exclude the Executive branch of the government.

How our president’s manipulative mind is wired!