Trump Repeating Mistakes Made by President Herbert Hoover in 1930 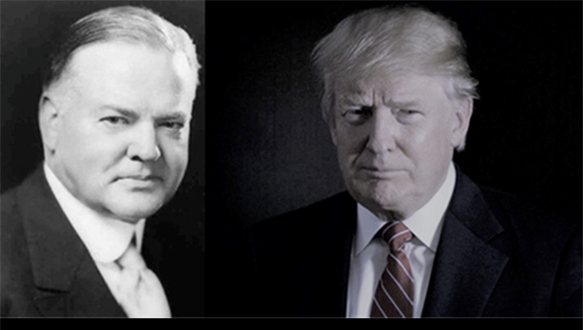 President Trump needs to crack a few history books before he continues the reckless trade war he has underway. President Hoover, a Republican like Trump, was a big fan of tariffs and actually campaigned on imposing tariffs in 1928, and then later signed the Smoot–Hawley Tariff Act. Historians attribute this economic protectionism as a key factor in making causing and compounding the impact of the stock market crash of 1929.

Making matter worse is the reality that despite the growing U.S. and world economy are booming, the dependence on world trade is much more significant. Global trade represents about 60% worldwide GDP today, much more than in the 1930s and the United States depends on its trade with for 30% of its GDP.

With President Trump on the verge of imposing $505 billion in Chinese products, Trump is perilously close to taking a step that could push the world towards a recession. Worse the Russians have already dumped 84% of its U.S. securities and if China follows by cashing in on the $1 trillion-plus U.S. Treasury bonds it owns. This comes at a time that the bond yield curve is flashing RED, and close to predicting a recession.

Reuters and other media reports, confirm for the first time, the bottom 60% of U.S. income earners have fueled recent consumption growth, which accounts for 70% of the U.S. economy. Meanwhile, flat wages could quickly trigger the U.S. economy to stall rapidly as the tariffs President Trump imposes drive a jump in inflation.

Already, the price of gasoline is rising at a disturbing rate. We could see $4 regular gas by November when people head to the polls.

Increasingly, Trump’s foreign policy and approach to governing resemble President Hoover's disastrous economic decisions made from 1928 through 1930. The background of the 1930’s with the world moving toward authoritarianism should not escape anyone. Even the United States flirted back then as now with authoritarianism.