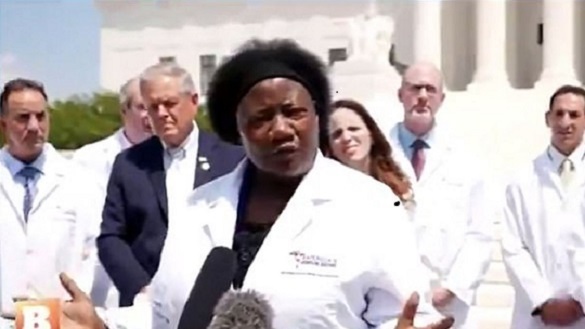 President Trump is back recommending hydroxychloroquine, which has been barred by the FDA as a COVID-19 treatment. Trump is pointing to a doctor he is very impressed and shares his medical beliefs but who he admits he knows nothing about. The doctor is a nut job.

A group of U.S. Doctors has formed an organization called “America’s Frontline Doctors” that was set up just 12 days ago by the right-wing group Tea Party Patriots.  Wealthy Republican donors back this group. According to their press, which was cited yesterday by President Trump as “a very credible, a very respected group of doctors” who praise hydroxychloroquine and say that face masks aren’t necessary to stop transmission of the highly contagious coronavirus.

The most animated of “America’s Frontline Doctors” is a Houston physician who claims she earned a medical degree in Niger and now practices in Houston. Without having any understanding of the medical credentials held by Dr. Stella Immanuel, both Donald Trump Jr. declared that her video is a “must watch,” which his father promptly retweeted.

The Donald Trump Jr. endorsement and President Trump’s retweet made Dr. Immanuel an instant star on the right-wing internet, garnering tens of millions of views on Facebook and Twitter on Monday alone before the video was taken down by both social media platforms.  Twitter then suspended Donald Trump Jr. account for ten days. The social media platforms quickly did their research and realized Dr. Stella Immanuel and the rest of the “America’s Frontline Doctors” are a bunch of quacks.

Trump recognized that the video was taken down by both social media platforms, and his son’s Twitter account was suspended but was unaware that Dr. Stella Immanuel had been medical claims she has made include those about alien DNA and the physical effects of having sex with witches and demons in your dreams.

Dr. Immanuel, a pediatrician, and a religious minister, have made some very outlandish deluded claims about medical topics and other issues. Besides her instances that reptilians run, the U.S. government, she also has claimed that gynecological problems like cysts and endometriosis are caused by people having sex in their dreams with demons and witches.

She also has alleged alien DNA is currently used in medical treatments, and that scientists are cooking up a vaccine to prevent people from being religious.

Immanuel and “America’s Frontline Doctors” gave viral speeches on the steps of the Supreme Court at what was described of “White Coat Summit,” a small group of “Doctors” who all dispute the medical consensus on the novel coronavirus.

In her video speech on the steps of the Supreme Court, Immanuel alleged she has successfully treated hundreds of patients with hydroxychloroquine, a controversial treatment Trump has promoted and says he has taken himself.

However, a few studies conducted so far have failed to find proof that the drug has any benefit what-so-ever in treating COVID-19, and the Food and Drug Administration (FDA) in June revoked its emergency authorization to use it to treat the deadly virus, saying it hadn’t demonstrated any effect on patients’ mortality prospects. Still, Dr. Immanuel insists…

“Nobody needs to get sick,”

“This virus has a cure.”

All of this brings us to the question that has to be asked. Did Dr. Stella Immanuel graduate from an accredited Medical School? Did she take a Texas state medical exam?

Another question that has to be asked is how President Trump’s staff allows him to go out and embarrass himself by promoting the credibility of a quack doctor who he admits he knows nothing about?

We think he is entirely motivated by desperation and is willing to risk the lives of millions of American’s in the desperation of not losing the upcoming general election on November 3rd, 2020. His fear appears to be driven by the approach of early voting, which starts in Wisconsin this coming Tuesday, begins in Florida on October 13th, in Texas on October 19th and many other states in the third week of October. Trump realizes his time is running out as he finds himself down between 8.5 and 15 points nationally in presidential polls.

WALK OUT: President Trump WALKS OUT After CNN Reporter Question