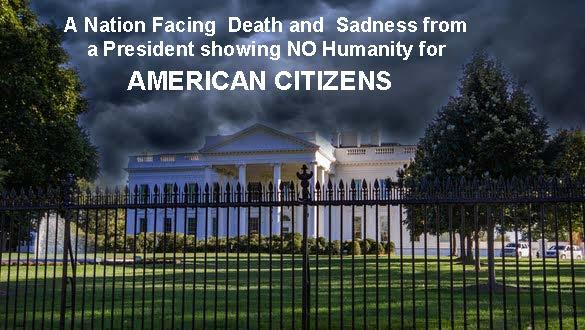 While President Trump and GOP are trying to figure out how to punish schools, the daily fatality rate from the coronavirus reaches 1,000 a day, and new active infections climb over 70,000.  That’s not going to stop Trump from trying to send millions of kids; hundreds of thousands of teachers and administrators back to school – risking severe sickness and death.


Beans To You President Trump

Yesterday, we saw in the United States over 71,000 people reported as newly infected, and the total deaths rise to over 140,000. We’re unfortunately on course to 100,000 new coronavirus infections a day and over 2,000 coronavirus deaths.

This means by election day,109 days from now, the total deaths from this pandemic in the United States will soar well over 250,000 as we have predicted, and infections could vault over 8 million.  These projections do not include the danger of reopening schools and are entirely based on conditions as they exist today.

Despite all the evidence that the pandemic is out of control here in the United States, President Trump and his GOP Kakistocracy of sycophants are such sociopaths that they are willing to risk the lives, literally the murder of thousands of children, teachers, administrators, and school support staff to reopen our nation’s schools by blackmailing states and localities.

It’s literally an organized murder conspiracy worthy of Joseph Stalin and Mao Zedong. It shows President Trump’s absolute desperation to win re-election or how he will reap his revenge on the American people for not re-electing him. Either way, it’s murder.

This isn’t a conspiracy theory. It’s happening before our eyes. Trump and Senate Republicans are reportedly calculating a plan to blackmail U.S. schools into reopening.  This plan is being carefully orchestrated to be implemented in a matter of weeks by attaching conditions or incentives to desperately needed COVID-19 relief funds.  This will happen as educators, parents, and medical experts are objecting and warning that sending children back to their classrooms without an adequate safety strategy is cruel insanity worthy of a sociopath. 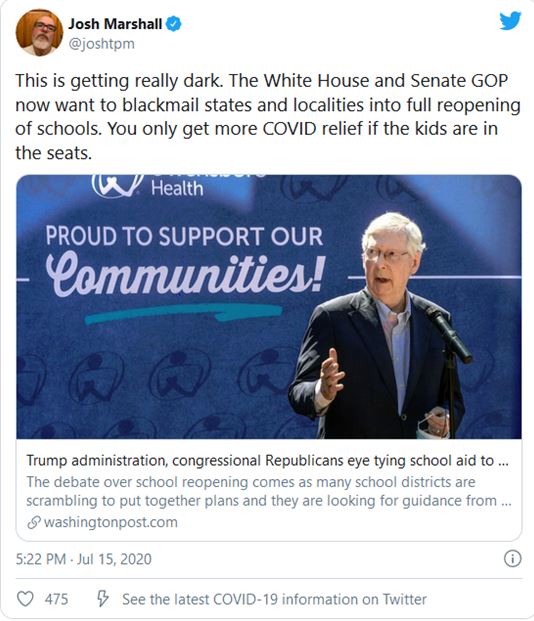 Anyone with an understanding of the scope of reopening schools amid this pandemic understands that school districts across the nation will need billions of dollars in funding to prepare to pull this off. Barmak Nassirian, American Association of State Colleges and Universities, was quoted yesterday as saying…

“Mismanagement of the crisis is now followed by an attempt to bribe schools to ignore the pandemic and act as if everything is normal.”

The Washington Post reported Wednesday that “the White House and Republicans are debating how to extort schools through the country into the opening, i.e., whether they use a “carrot or a stick approach.”

“Some White House officials are pushing for conditioning the aid on schools reopening partly or fully, but others involved prefer to offer incentives to schools to take steps to reopen,”

One anonymous Senate GOP aide told The Washington Post that…

“There are those who would rather incentivize good behavior, and others want to punish bad behavior.”

While talks between the GOP Senate leadership and White House over education funding are ongoing and the figures could change, The Washington Post reported that...

“Republican officials familiar with the negotiations said the bill may include somewhere between $50 billion and $100 billion for elementary and secondary schools, with one person familiar with the talks saying the target was about $70 billion.”