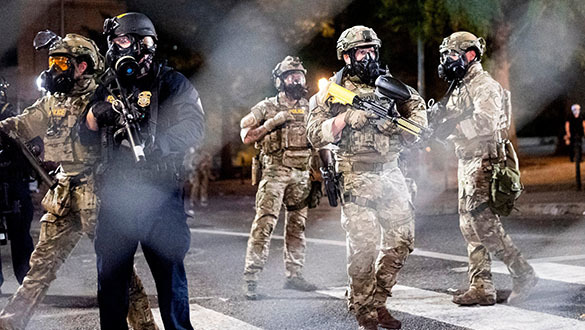 Vladimir Putin has perfected the use of secret police to suppress peaceful protest or even to invade countries. President Trump is resorting to the Putin playbook with his deployment of unidentified federal agents to Portland, Oregon, who are driving around in unmarked vehicles and snatching people off the streets. Trump’s goal is transparent and designed to sew enough chaos Democrat-led cites across the country as part of a 2020 campaign strategy to justify his ridiculous law-and-order campaign scare strategy.

Trump is running as an authoritarian that is going to save White Americans from the browning of America. It’s a similar scare message that George Wallace and Richard Nixon used in 1968.  They leveraged the anti-Vietnam War protests and fears that the civil rights would mean that the nation’s suburb’s would be infiltrated by black and brown Americans and therefore destroy the American dream.

“We’re going to have more federal law enforcement, that I can tell you,” President Trump said in the White House. “In Portland they’ve done a fantastic job, they’ve been there three days and have done a fantastic job. These people are anarchists, they hate our country and we’re not going to let it go forward.

Keep in mind the protests of 1966-1968 were growing rapidly and were featured on the three major networks at 7 PM and 11 PM nightly and were being painted as violent. Here is 2020; that’s not happening. The violence is isolated to specific locations, and instead of being blamed on the protesters – much of it is being blamed on police, law enforcement, and far right-wing white nationalists, neo-Nazis, and KKK groups.