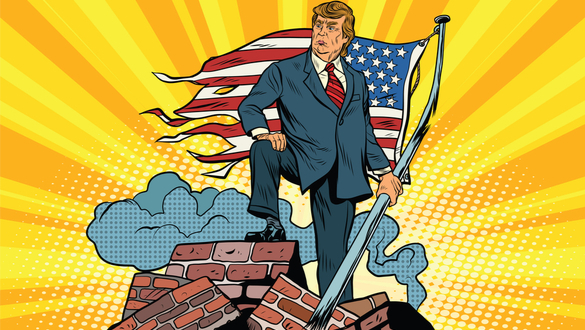 The president’s decision to assert executive privilege over the entirety of the subpoenaed materials by the House Judiciary Committee that are connected to the Mueller investigation amounts to nothing more than an attempt to cover up the truth about his criminal obstruction of justice.

President Donald Trump has already been referred to cryptically as unindicted co-conspirator individual #1 during his ex-personal lawyer Michael Cohen’s plea and sentencing to campaign finance felonies.

Trump and the GOP despite their swagger, bluster and denials are acting as if they are cornered on a sinking ship. His efforts to prevent Don Meghan, Robert Mueller and for that matter any witness that will expose him, shows the intense panic over the whirlwind overtaking his presidency.

The New York  Times bombshell report yesterday and release of Trump’s tax returns from 1985-1994 demonstrates it's going to be impossible to hide his past criminality. Trump’s personal and business tax returns could be released via New York State thanks to legislation approved and endorsed by New York Governor Cuomo that is rocketing through the NY State Legislature. His tax returns and other evidence of criminal and civil wrongdoing could also find its way public through his current and former banking relationships, accounting firms or even ex-employees who have traded documents and information for immunity.

His latest attempt to keep a tight lid on evidence is to assert executive privilege over the entirety of the subpoenaed materials by House Judiciary Committee Chairman Jerry Nadler (D-NY). Make no mistake Trump is a want to be a dictator who is rejecting ANY congressional oversight and is defying the very fundamental nature of our constitution of three separate but equal branches of government, and as a result, is rejecting the rule of law.

His newly appointed Attorney General Bar’s refusal to turn over a full, unredacted version of the Mueller report and its underlying evidence will not stop at holding Barr in contempt of Congress for refusing to show up for a House Judiciary Committee hearing on the Mueller report last week. Barr is likely also to face impeachment hearings that will force both he and the President to turn over a great deal of evidence they are trying to keep from the American people.

President Trump’s strategy of delaying as much information from coming public before the 2020 election is a fool’s errand.

Trump has so much criminality to guard against disclosure from so many different directions all he’s doing is delaying the release of information so that it continues to leak out through the entire election campaign. Imagine running for re-election for president and having one story after another with witnesses and documentary evidence of civil fraud and criminality pouring into the public venue.  Worse Trump could find himself, family members and his businesses indicted by New York’s Attorney General Leticia James, or Manhattan District Attorney Cyrus Vance Jr. at any minute.

The attempts at keeping evidence secret and witnesses’ silent are just an extension of obstruction of justice and criminality. These are futile efforts that are bringing him closer and closer - to a post-presidency prison sentence or sentences.