Trump Misled Americans about the COVID-19 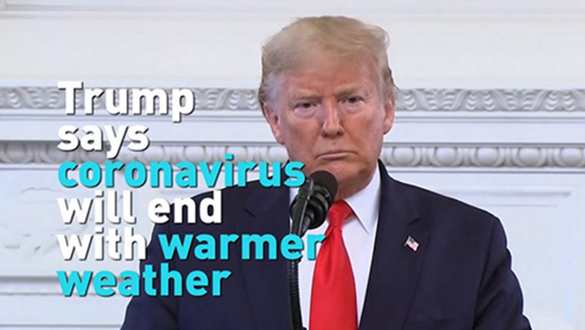 It will all be over in April like a miracle. This statement should not be taken as one of the 12,000+ lies made by the President of the United States of America; Trump was only trying to protect us from our human frailties.

President Donald Trump told journalist Bob Woodward that he intentionally downplayed the severity of the coronavirus in public comments to avoid triggering a panic.

Had President Franklin Delano Roosevelt took the approach of keeping the attack on Pearl Harbor quiet so as not to panic the American people on December 7, 1941, it’s conceivable the United States and its allies might not have won World War II.

If President John F. Kennedy had concealed the deployment of nuclear weapons in Cuba in 1962, it’s conceivable that the Soviet Union would have won the cold war.

President Trump’s argument that he kept the severity of the coronavirus secret somehow prevented panic on Main Street and Wall Street served the interest of our country amounts to a pile of horse manure. His decision to pretend for months that they coronavirus would go away magically may have cost between 30,000 to 50,000 American lives. His response to the press is BELIEVES MILLIONS of people would have died.

President Trump claims he downplayed the coronavirus to keep medical supply prices low...a reporter points out that he didn’t even start buying the supplies until a month later.

Trump also doesn’t seem to understand that the coronavirus came through Europe to the United States. He leaves that out when he brags about shutting down travel to and from China.

BUSTED: Trump Caught in Lie AS IT HAPPENS