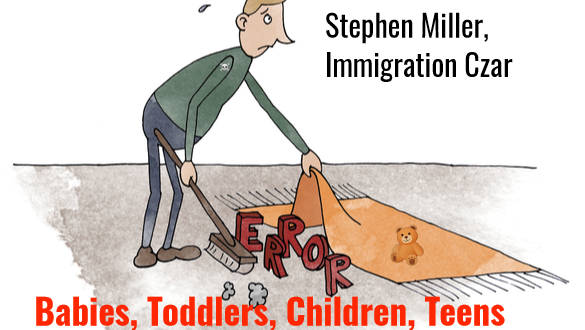 The glaring light of public shame still hasn’t stopped the caging and torture of babies, toddlers, children, or teens. Subjecting many immigrants to live months, even years in concentration camp conditions that make the Japanese internment experience look benign. But for those sick living in U.S. for medical care may stay.

The Trump Administration has reversed the course of giving sick and dying foreigners living in the United States on forcing them to leave or deporting them in 33 days. President Trump knew the visual recording of ripping children from their hospital beds, pulling the plugs on dialysis and other machines would reveal him as the Antichrist rather than the chosen one.

The hilarity of this reversal of the President of the United States is already claiming he never has such a policy, hoping people won’t see the letters of the decision sent to Homeland Security giving each ill child, adult, and their families 33 days to return to the native countries. Many of these children had been invited by medical researchers to their universities, public and private hospitals as well as their research facilities so to develop breakthrough cures and treatments.  In other words, people with rare and hard to treat diseases, many recruited by U.S research physicians to lean from treating them to save the lives of U.S. and all of the world’s children, were given 33 days to leave the United States. For many it would have been a death sentence.

Stephen Miller, his immigration czar, was unable to win these deportations now but it should be considered only a delay. President Trump has a fetish for cruelty as proven by his executive order to stop separating children from their parents at the border. A few months after the signing the policy is still being followed, with children being held months after they can be legally held, by the way at a cost of $750 paid to Republican fat cats companies.

Children have been neglected, starved, tortured and raped in the custody of,   and, by the U.S. authorized authorities. So, Trump’s reversal on this ghoulish policy may only be a respite. He has a habit to reversing only to reverse again after the headlines and horror fades.