Trump May Literally Be A Moron When It Comes To Understanding How The World Economy Works! 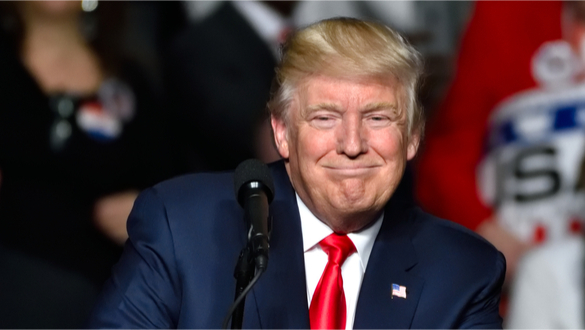 I’ve been gnawing on something reported by the Wall Street Journal a week ago regarding President Trump’s view of the escalating trade war. My agitation over what I heard was only made worse after watching his interview on the subject with CNBC’s Joe Kernen late last Friday.

President Trump cited the health of the U.S. economy as giving him “leeway” to pursue his risky trade war, claiming the stock market is up 40% since he’s been elected (something that’s not true and which CNBC’s Kernen didn’t correct him on).

President Trump’s assumption is that the U.S. economy is roaring, and as a result, won’t be affected by the spiraling tariffs he his imposing in what is becoming the biggest trade war in human history. Joe Kernen sat through the interview lapping up the President’s bullshit as if he had no clue he was listening to the village idiot.

The fact is… Trump’s reckless trade war will undermine economic growth in the United States at the rate of escalation that could shave a lot more than one or two points off GDP here in the U.S. and around the world if the trade war continues to grow in size.

Trump’s reasoning – in particular, on how the relative strength of the stock market empowers him to take risks with his trade agenda – is just pure economic quackery!

Yet, as if this nonsense wasn’t bad enough, Trump’s economic idiocy goes further and became entirely disconnected from reality when he went on to say to Kernen …

“You know the expression ‘we’re playing with the bank’s money’” he told CNBC’s Joe Kernen in a “Squawk Box” interview aired last Friday.

President Trump actually believes Wall Street’s gains have generated enough wealth, that he has put every investor so far “ahead” that if his trade war sinks the stock market or keeps it from rising, it’s not a big deal because it won’t wipe out all of the previous gains - seriously, folks …WTF?

No wonder Donald Trump has been forced to bankrupt four of his businesses – including a casino – and stuck literally hundreds of vendors with unpaid bills.

This leads him to believe that most people are “playing with the bank’s money.” No matter how bad things get as a result of Trump’s agenda, he believes the gains people may have enjoyed during the first several months following his election and swearing in to office won’t be wiped out entirely.

Except, this isn’t a responsible way to look at the debate. As Trump really ought to know by now, the stock market is not the economy, which makes this the wrong metric. To see Wall Street gains and losses as some real-time daily barometer of the nation’s economic health is voodoo economics.

Trump’s confusion becomes even more apparent when he added …

“The market would likely be much higher if he didn’t escalate the trade issues with China and the rest of the world.”

Will the red-state farmers struggling across the country facing bankruptcy and greater amounts of debt be comforted by the fact that their plight really doesn’t matter because the S&P 500 previous gains gives him some “leeway”?

Do Larry Kudlow and the rest of the economists currently advising Trump buy into the argument that previous market gains are the only thing that matters?

What President Trump is literally doing is telling investors he’s deliberately pursuing an economic and trade war with most of the world that he knows will undermine investor returns. Trump’s entire dim witted approach to economic policy is encouraging investors to move to cash and out of the stock market. When investors figure this out – we could see the entire 31% gain since the day after Election Day 2016 wiped out.

This President doesn’t understand that he’s not playing with “the bank’s money”. He’s gambling with the savings of 200+ million Americans; and as his reckless trade war and economic policies bring about real pain and has an adverse effect on the economy, the more real people will feel the pain – perhaps pain worse than we felt from 2008-2010 when the U.S. economy teetered on the worst economic crisis in U.S. history.