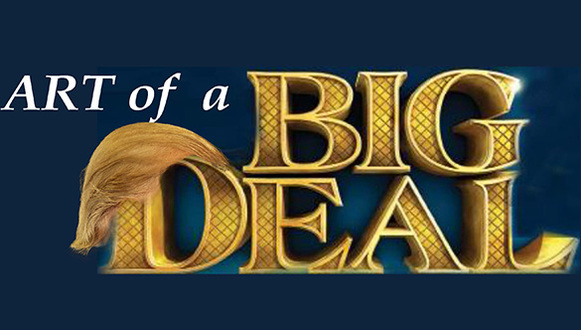 Treasury Secretary Steven Mnuchin and U.S. Trade Representative Robert Lighthizer began high-level talks with Vice Premier Liu He today in Beijing today in hopes of negotiating an end to the ongoing trade war between the two largest economies in the world. President Trump had threatened to ratchet up tariffs on $200-$250 billion of Chinese imports from 10% to 25% on March 1, 2019, if the two countries were unable to negotiate a new mutually acceptable trade deal.

Hopefully reports that President Trump is considering a 60-day extension to his March 1, 2019, drop-dead deadline to negotiate a new trade deal with China are accurate. Treasury Secretary Steven Mnuchin and U.S. Trade Representative Robert Lighthizer arrived in Beijing yesterday and began renewed negotiations with Vice Premier Liu He and the rest of China’s trade negotiators.

Fresh off his partial government shutdown humiliation, taking less than he was originally offered by Democrat lawmakers in December 2018, President Trump needs a validating win. He desperately needs to show he’s every bit the masterful negotiator he has portrayed himself to be during his 2016 election campaign.

With more than a dozen Democrats already or about to enter the 2020 race, President Trump is facing one of the toughest modern-day re-election campaigns in decades. Michael London, co-editor of WorldOpportunityInvestor.com (WOI) points out…

“President Trump has shown he dares to confront the trade inequities that have existed for decades with our trading partners like China, European Union and our North American neighbors to the north and south during his first two years in office. Now he has to show he can deliver solutions and is capable of getting substantial concessions.”

“The growing likelihood of a global recession that could smother economic growth in the United States is putting some serious new pressure on him. The last thing Trump wants is to run for re-election in 2020 and have to deal with a recession. That kind of economic environment limited President’s Carter and George H. Bush to one term presidencies.”

The latest Gallup poll shows that Trump’s job approval rating jumped from 37% to 44% thanks to the end of his partial government shutdown. His disapproval number also showed a big improvement; falling from 59% disapproval to 52%, which of course is going to make his re-election very difficult.

Trump needs a deal, the Chinese know it and by giving Treasury Secretary Steven Mnuchin and U.S. Trade Representative Robert Lighthizer another 60 days culminating in a face to face meeting to finalize a trade deal makes solid sense.

Meanwhile, China’s exports posted a surprise jump which may indicate our Asian trade partner’s economy may be stronger than believed. Exports grew by 9% in US dollar terms in January over last year.

Fears that the United States- China trade war could slow down the second largest economy in the world has alarmed business leaders and investors across the globe. Fear that President Trump would ratchet up the tariffs put in place last year has prompted concerns on over a possible global recession. Companies like Apple, Caterpillar have blamed China weakness for their recent disappointing earnings reports.

Despite the rebound in China exports in January, many economists and business leaders are skeptical that it will continue unless the Trump and Xi Administrations can reach a trade deal soon. 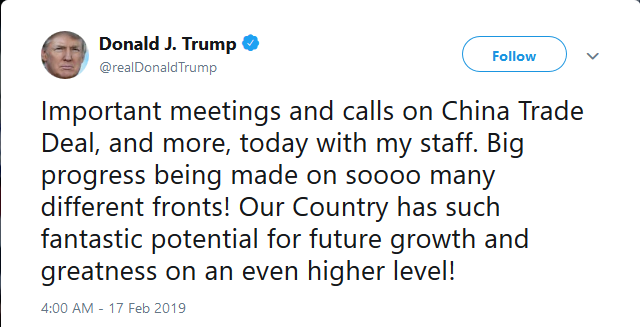 Michael London, of World Opportunity Investor, suggests a firm announcement of an extension of U.S. Chinese trade negotiations and the setting of a date for face to face between Presidents Trump and Xi would be enough good news for a relief rally in both U.S. and Chinese equities.