Trump Likes Where Trade Talks are Going. Tariff Threats are On Going 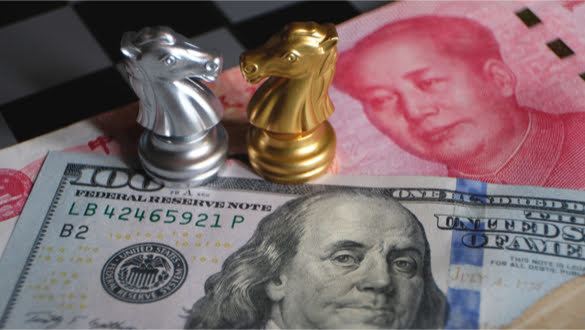 On Friday, White House economic adviser Larry Kudlow said President Trump is encouraged by the direction of trade negotiations with China.  The president still intends to impose a new round of U.S. tariffs on Chinese consumer goods if no ‘Phase One’ deal is agreed.

Over the weekend, President Trump reaffirmed his confidence and optimism that a ‘phase one deal’ will be agreed to by the United States and China. Trump insists that calls and communications are ongoing;  despite reports that the Chinese had cut off communications for eight days.  China took this action to show its displeasure over the President’s signing of bills in support of the Hong Kong democracy movement.

With one week to go before the final deadline, Kudlow, the director of White House's National Economic Council, insists that intense negotiations were underway.   Trump would make a decision on the import tariffs, which would hit Chinese-made cellphones, laptop computers, toys, and clothing scheduled to take place. Kudlow was quoted as saying…

"There's no arbitrary deadline here ... but that fact remains December 15 is a very important date with respect to a no-go or go-on tariffs…It's going to be totally up to POTUS (the U.S. president). But December 15th is an important date."

On Friday, China announced it was waving import tariffs on some U.S. soybeans and pork shipments in a good faith effort to help negotiations progress. Kudlow described the waivers as "good mood music" for the negotiations between the world's two largest economies.

Trump struck an upbeat tone last week even after Chinese officials reiterated their stance that existing tariffs must come off as part of an interim deal to de-escalate the U.S.-China trade war.

Both Washington and Beijing know that if they can’t reach agreement on a 'phase one' trade deal that it further roil financial markets around the world. Not reaching an agreement will continue to disrupt supply chains and also weigh on global economic growth.

The big hang-up to get a ‘phase one’ trade deal done is China’s insistence some of the existing U.S. tariffs imposed on about $375 billion worth of its exports be removed.   Chinal also insists on the removal of the threatened December 15 tariffs on $156 billion of its remaining exports to the United States.

President Trump demanded that China commit to specific minimum purchases of U.S. agricultural products. The Chinese have made it clear they are willing to compromise and spread the desired increase in purchases out over the next several years rather than all at once. China has also expressed willingness to include concessions on currency and access to China's financial services markets that are phased in.

Both parties have expressed a willingness to negotiate concessions on intellectual property rights in a ‘phase two’ of negotiations. However, China has already proposed initial reforms. Kudlow told Bloomberg Television regarding President Trump…

"We've all learned that if he is not satisfied with these talks ... then he would not hesitate to increase tariffs,"

Kudlow admitted that while both sides are talking almost daily, there are currently no plans for in-person talks or a signing ceremony between Trump and Chinese President Xi Jinping…

"None of those decisions have been made ... let's get a deal first, and then we'll figure out how, when, and where they'll do the signing."