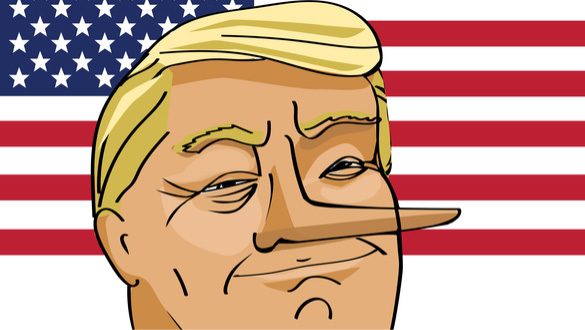 The president told Congress he had data showing immigrants were more likely than native-born Americans to be terrorists. That isn’t true.

Lawfare's Benjamin Wittes, a national security journalist researching President Trump’s claim made in a speech to Congress last year, filed a Freedom of Information Act request to determine if the President’s following claim was true…

“According to data provided by the Department of Justice, the vast majority of individuals convicted of terrorism and terrorism-related offenses since 9/11 came here from outside of our country.”

Wittes believed the statistic was not accurate and that the vast majority of domestic terrorism is committed by US citizens—and he didn't believe that the Department of Justice even kept track of where terrorists were born. So he filed a Freedom of Information Act request for any documents dealing with the subject in February. The National Security Division (NSD) responded with documents only related to international terrorism. These offered no proof of Trump’s claim that immigrants were more likely than native-born Americans to be terrorists.

Lawfare's Benjamin Wittes discovered both NSD and the FBI emphasized the limitations of this data in its communications with the Trump Administration. In fact, the DOJ explicitly warned the White House that the data did not “include convictions related solely to domestic terrorism.” And the FBI noted that “database checks are limited in their ability to accurately identify a date/place of birth.”

Discovering all this, Wittes sued for additional documents from the DOJ, and after some lawyer-on-lawyer action, the government eventually told him that there were "no responsive documents" related to his request.

Therefore, wherever President Trump got that statistic, it wasn't from the DOJ.

"It wasn’t true about immigrants and terrorism. And neither was it true about the Justice Department."

Wittes then pointed out that Trump’s lie wasn’t the kind of lie one might throw out in the heat of an interview or improvised rally (though even then, you'd rather the president not lie, period). It was, in fact, a lie he told as part of an official speech to a joint session of Congress, and therefore presumably vetted by multiple people.

Wittes also pointed out that this wasn’t a case of Trump simply spinning obviously fake personal anecdotes as he so often does—this time, he was hitching his lie to the Department of Justice, the top law enforcement agency in the land.

Frustrated by the disclosure Wittes wrote …

“The proof that Trump's nonsensical claim about immigrants being terrorists was in fact nonsense won't have much practical effect on American politics, unfortunately. It barely qualifies as a scandal; I can't imagine it will make even a minor dent in Trump's nativist crusade. (An absence of facts has never slowed him down before.)

“But it's worth pausing on this lie because of how much effort it took to prove it definitively to be a lie—Trump can invent a statistic in a second, but it might take a journalist months to disprove it, by which point the public has moved on.”

WallStreetRebel.com: Such is the nature of authoritarian rulers, despots, and strong man fascists. Presidents pathological lying will not end well. Lying to a GOP controlled Congress is one thing – doing it if Congress flips over to the Democrats next January are another. Intentionally lying to Congress is a felony and an impeachable offense.

Trump’s lying appears to be catching up to him at this point. The Morning Joe on MSNBC reported that the new Quinnipiac University poll says that President Trump’s disapproval rate is 53 percent. The national poll indicates that only 38% of those polled approve of the President’s job performance.