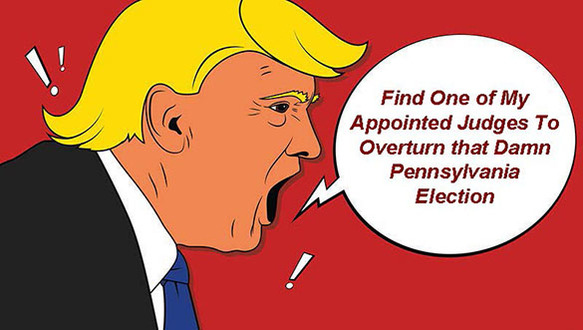 President Donald Trump’s campaign suffered yet another humiliating loss on Friday in its efforts to overturn the 2020 presidential election — and this time, it came at the hands of one of the president’s own Federal Judiciary appointees.

In Friday’s blistering ruling, the United States Court of Appeals for the Third Circuit Judge Stephanos Bibas shot down the campaign’s appeal of its Pennsylvania lawsuit seeking to nullify the state’s entire election results.

“Free, fair elections are the lifeblood of our democracy,” Bibas wrote. “Charges of unfairness are serious. But calling an election unfair does not make it so. Charges require specific allegations and then proof. We have neither here.”

Judge Stephanos Bibas was appointed to the Third Circuit by Trump in 2017 and then showed that lead Trump campaign attorney Rudy Giuliani told the court that they were not alleging fraud in asking for the election results. be tossed out…

“The Campaign tries to repackage these state-law claims as unconstitutional discrimination. Yet its allegations are vague and conclusory,” wrote Bibas. “It never alleges that anyone treated the Trump campaign or Trump votes worse than it treated the Biden campaign or Biden votes.”

To rub more salt in the wound, Bibas specifically lauded a previous judge who dismissed the Trump campaign’s claim with prejudice.

Jenna Ellis, President Donald Trump’s personal attorney, and the Senior Legal Adviser to the Trump campaign, appears to be as disconnected with reality as her client, attacked the Third Circuit for its unanimous 3-0 ruling against the campaign in a Pennsylvania election case. Ellis was once again mocked for her response. Many publicly wondered if she faces disciplinary action, even suspension of her license to practice law for her involvement in such a reckless appeal.

Ellis says she and Trump’s personal attorney Rudy Giuliani have decided that the three judges, who were all appointed by Republican presidents – including the one who wrote the opinion was appointed by Trump himself – are all part of the “activist judicial machinery” in Pennsylvania.

Ellis appears to ignore the brutality of the decision and is vowing to take the case – which the judges say has “no merit” to the U.S. Supreme Court. Her making an appeal by herself or with other lawyers, including Rudy Giuliani, could end up guaranteeing her own suspension or debarment for even attempting to bring a request to the Supreme Court without a shred of evidence. They could also be heavily fined.